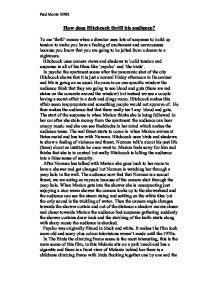 How does Hitchcock thrill his audience?

How does Hitchcock thrill his audience? To me 'thrill' means when a director uses lots of suspense to build up tension to make you have a feeling of excitement and nervousness because you know that you are going to be jolted from a dream to a nightmare. Hitchcock uses camera views and shadows to build tension and suspense in all of his films like `psycho` and `the birds`. In psycho the apartment scene after the panoramic shot of the city Hitchcock shows that it is just a normal Friday afternoon in December and life is going on as usual. He pans in on one specific window the audience think that they are going to see blood and guts (there are red stains on the concrete around the window) ...read more.

After Norman has talked with Marion she goes back to her room to have a shower and get changed but Norman is watching her through a peep hole in the wall. The audience now feel that Norman is a s****l threat, we are acting as voyeurs because of the camera shot through the peep hole. When Marion gets into the shower she is unsuspecting just enjoying a nice warm shower the camera looks up to the showerhead and the audience can see the steam rising and settling on the white tiles but the only sound is the trickling of water. Then the camera angle changes towards the shower curtain and out of the distance a shadow moves closer and closer towards Marion the audience feel suspense gathering suddenly the shower curtains draw back and the stabbing of the knife starts along with sharp music the audience is shocked. ...read more.

The birds look menacing because they are big and black which represents death. The phone box scene was a very tense scene for the audience, as the petrol runs along the ground towards the man lighting a cigarette, the people inside the pub try to warn him but he doesn't hear them and he drops the match onto the petrol and it is set on fire, Melanie then runs into a phone booth which is surrounded by fire and the birds are crashing into it, thudding as they hit the glass, the camera shows the town from a birds eye view in the air, similar to `psycho` when the camera pans into the apartment through the window. The 1998 version of Psycho is more up to date because it is in colour and the sound is better I think this is more thrilling and understanding than the old one because the blood and acting looks more realistic. Paul Morris 10W3 ...read more.