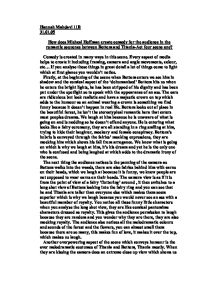 How does Micheal Hoffman create comedy for the audience in the romantic sequence between Bottom and Titania-Act four scene one?

Hannah Mahdavi 11B 31.01.05 How does Micheal Hoffman create comedy for the audience in the romantic sequence between Bottom and Titania-Act four scene one? Comedy is created in many ways in this scene. Every aspect of media helps to create it including framing, camera and angle movements, colour, etc... If you analyse these things in great detail a lot of things come to light which at first glance you wouldn't notice. Firstly, at the beginning of the scene when Bottom enters we see him in shadow and the comical aspect of the 'dehumanised' Bottom hits us when he enters the bright lights, he has been stripped of his dignity and has been put under the spotlight so to speak with the appearance of an a*s. The ears are ridiculous but look realistic and have a majestic crown on top which adds to the humour as an animal wearing a crown is something we find funny because it doesn't happen in real life. Bottom looks out of place in the beautiful forest, he isn't the stereotypical romantic hero that enters most peoples dreams. ...read more.

see that he and Titania are taller than everyone else which makes them seem superior which is why we laugh because you would never see an a*s with a beautiful member of royalty. You notice all these funny little characters when you analyse the long shot view, they are like comical pantomime characters dressed as royalty. This gives the audience permission to laugh because they are random and you wonder why they are there, they are also mocking royalty. The audience also notices all the melodramatic colours and sounds of the forest and the flowers, you can almost smell them because there are so many, this makes fun of love, it makes it over the top, which makes us laugh. Another overpowering aspect of the scene which conveys humour is the over melodramatic costumes of Titania and Bottom, Titania mostly. When they are kissing the camera does an extreme close up view which shows us their expressions in great detail. Titania is wearing a very gaudy, gold headdress which looks cheap, this makes us laugh because it looks like something you see in the pantomime. ...read more.

The music that plays in the background during the love scene is very overpowering, untactful and almost sickening and we laugh because it is making fun of old romantic films with the stereotypical music. The main thing we find funny is the fact that Titania is making love to an a*s, she is unaware of what she is doing because of the spell she is under. If she was aware she wouldn't do it because she would see Bottom for what he really was like how the audience sees him, ugly. We also laugh at how this is Bottom's dream and yet he is being laughed at and embarrassed. Therefore, comedy is created by making the audience laugh at all the random things in this scene. There are things which give the audience permission to laugh, for example, the strange pantomime characters, there is no reason they are there so we laugh. Dramatic irony is also created a lot in this scene due to the spell Bottom and Titania are under. Bottom's fall from arrogance is also shown in this scene which makes us laugh because he is being totally humiliated. ...read more.