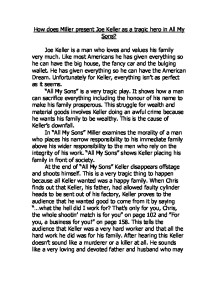 How does Miller present Joe Keller as a tragic hero in All My Sons?

How does Miller present Joe Keller as a tragic hero in All My Sons? Joe Keller is a man who loves and values his family very much. Like most Americans he has given everything so he can have the big house, the fancy car and the bulging wallet. He has given everything so he can have the American Dream. Unfortunately for Keller, everything isn't as perfect as it seems. "All My Sons" is a very tragic play. It shows how a man can sacrifice everything including the honour of his name to make his family prosperous. This struggle for wealth and material goods involves Keller doing an awful crime because he wants his family to be wealthy. This is the cause of Keller's downfall. In "All My Sons" Miller examines the morality of a man who places his narrow responsibility to his immediate family above his wider responsibility to the men who rely on the integrity of his work. "All My Sons" shows Keller placing his family in front of society. At the end of "All My Sons" Keller disappears offstage and shoots himself. This is a very tragic thing to happen because all Keller wanted was a happy family. When Chris finds out that Keller, his father, had allowed faulty cylinder heads to be sent out of his factory, Keller proves to the audience that he wanted good to come from it by saying "...what the h**l did I work for? ...read more.

The audience sees that Chris treats Keller how he would treat any other man who had committed the same crime. It is Chris' belief that society is just as important as family that makes him treat his father like a man, not just like a father. I think that Chris' war experiences had a dramatic effect on his attitude towards society and his family. On page 121 in his speech about the soldiers he was in charge of during the war he says "They didn't die; they killed themselves for each other". Here, Chris is commenting on how selfless those soldiers were and how they gave everything they had and died so that they could help their comrades. I think Chris' war experiences really opened his eyes up to how selfish people are in the real world and how rather than man helping fellow man it is more like dog eat dog. Chris says in his speech "A kind of - responsibility. Man for man." I think this is what he has learnt from his soldiers. He has learnt that in society you have a responsibility to one another and that is why Chris feels society is equally important to family. As the play unfolds Keller begins to realise that Chris does not agree with his belief that family is more important than society. ...read more.

In Keller's case his highpoint is achieving the American Dream. We know he is very wealthy because in the introduction it says his house "would have cost perhaps fifteen thousand dollars in the early twenties when it was built". That was a lot of money in those days so we can take a pretty safe guess that Keller was living up to the American Dream. Joe Keller is looked up to in his neighbourhood even though they do actually know what he has done. He is a respected figure in society because the neighbourhood admires him for being able to wriggle his way out of a prison sentence. They admire him for how clever he was to lie and pin the blame on someone else. I think this is a very corrupt society and I think that is what Miller was trying to portray to the audience in "All My Sons". Miller wanted to get across to the audiences his views on American society. I think Miller writes about another broader tragedy in the play besides Keller's tragedy. This tragedy is the society we live in today and how nobody looks out for each other. It is all about the survival of the fittest nowadays. This is what Chris tries to stand up against throughout the play. Keller's tragedy in "All My Sons" is that he works so hard for the American Dream and at the end of the play he shoots himself. By doing this he is giving up everything he has worked so hard for over his life. ...read more.