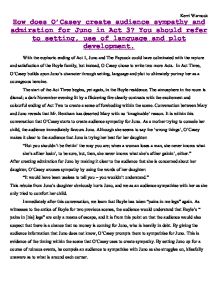 How does O'Casey create audience sympathy and admiration for Juno in Act 3? You should refer to setting, use of language and plot development.

How does O'Casey create audience sympathy and admiration for Juno in Act 3? You should refer to setting, use of language and plot development. With the euphoric ending of Act 1, Juno and The Paycock could have culminated with the rapture and satisfaction of the Boyle family, but instead, O Casey chose to write two more Acts. In Act Three, O'Casey builds upon Juno's character through setting, language and plot to ultimately portray her as a courageous heroine. The start of the Act Three begins, yet again, in the Boyle residence. The atmosphere in the room is dismal; a dark November evening lit by a flickering fire clearly contrasts with the excitement and colourful ending of Act Two to create a sense of foreboding within the scene. Conversation between Mary and Juno reveals that Mr. Bentham has deserted Mary with no 'imaginable' reason. It is within this conversation that O'Casey starts to create audience sympathy for Juno. As a mother trying to console her child, the audience immediately favours Juno. Although she seems to say the 'wrong things', O'Casey makes it clear to the audience that Juno is trying her best for her daughter: "But you shouldn't be frettin' the way you are; when ...read more.

It is at this point that O'Casey creates admiration for Juno through her actions. "If Mary goes, I'll go with her." This short and effective statement made by Juno is recognised by an audience, as the task she is taking on is immense. Because of her love for her child, Juno is bravely swearing to help raise Mary's child in a world where it was deemed unacceptable to have a child with no father. This shows courageousness and love on Juno's part and the reaction from Boyle reinforces that she is, indeed, alone: "Well go with her!" With a broken marriage, Juno is left pleading with her son to calm down; again, degrading herself for the sake of her child. "If you don't whisht, Jonny, you'll drive me mad." While Juno deals with her cowardly and selfish son, two men enter to repossess her furniture. Being stripped of her dignity while the audience helplessly watches, Juno's language shows how she is still fighting through her broken marriage and home to save herself: "Everythin's gone wrong, Mary, everythin'. We're not getting' a penny out o' the Will, not a penny - I'll tell you all when I come back; I'm goin for your father." ...read more.

This quote reinforces that Juno is a heroine; she is coping with the death of her son, pregnancy of her daughter, failing of her marriage and ring of debt on her own. This plea for help shows that she is only human, and her pride has endured so much that all she can do is ask for help. Juno leaves the play with audience sympathy and admiration as her will to succeed is still present while her life has crumbled. O'Casey contrasts Juno's dramatic exit with Joxer and Boyle's drunken entrance. They make Juno even more of a heroine to the audience as their drunken stupor contrasts to the courageous decision Juno has just made. Blissfully unaware of his son's death and wife's absence, Boyle comes across as arrogant: proving that Juno has made a good decision for herself and consequently, building upon audience admiration for her. The play concludes with Boyle's drunken statement: "I'm telling you...Joxer...th' whole worl's...in a terr...ible state o'...chassis!" O'Casey uses irony in this final statement to contrast Juno and Boyle's, now, opposing lives. As the whole world may be in a "state o'...chassis" for Boyle, Juno's positive decision has lifted her out of this world, and into another life. Kerri Warnock ...read more.