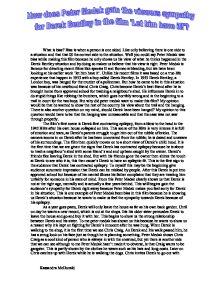 How does Peter Medak gain the viewers sympathy for Derek Bentley in the film 'Let him have it!'?

What is bias? Bias is when a person is one sided. Like only believing there is one side to a situation and that that IS the correct side to the situation. Well you could say Peter Medak was bias while making this film because he only shows us his view of what he thinks happened in the Derek Bentley situation and by doing so makes us believe that his view is right. Peter Medak is famous for directing recent films like species II and Romeo is bleeding, but we have been looking at his earlier work 'let him have it'. Unlike his recent films it was based on a true-life experience that happen in 1953 with a boy called Derek Bentley. In 1953 Derek Bentley, a London boy, was hanged for the murder of a policeman. But how he came to be in this situation was because of his newfound friend Chris Craig. Chris become Derek's best friend after he is brought home from approved school for trashing a neighbour's shed. He influences Derek in to do stupid things like robbing the butchers, which goes horribly wrong and is the beginning to a trail in court for the two boys. But why did peter medak want to make this film? My opinion would be that he wanted to show the rest of the country his view about the trail and the hanging. ...read more.

Later on Chris catches up with Derek while he is walking the dogs. Chris invites Derek to go out with them on a night. Derek does not refuse and begins to hang about with Chris, he even has his hair done to fit in. but until they are involved with a ship robbery in which Derek gains a new coat and a packet of stolen cigarettes. Derek the stolen cigarettes to his dad for his birthday but is unaware that the cigarettes have a label on the back which reads 'Only to be sold and used by military forces only' Let him have it Peter Medak . From this label Derek's dad knows that the cigarettes are stolen. This then causes uproar between Derek and his dad who begins to question him about where he got his hair done? His new coat from? And how he paid for them? At this point in the film the audience are caught in the action on the house because Derek's dad is refusing to Derek see Chris. This is like a whole burden been lifted of the audience's shoulders because they know that Derek respects his father and would not do anything to harm or hurt him. But to the majorette of the audience who know the story of Derek Bentley it is the beginning of a new trouble. ...read more.

this may cause a bit of distress for some viewers because they would be thinking why don't you just 'run away now'. The police sergeant who has got Bentley by his side asks Chris to hand the gun to him but Chris refuses. Then out of the blue Derek shouts "Let him have it Chris " Let him have it Peter Medak Now that sentence could be took either way by the audience it could be took as let him have the gun Chris or as shoot him, but what ever way it is took, it was took as let him have the gun Chris by myself. Although the fact that Peter medak has made the film a bit biased I do believe that Peter Medak believes that is how it was meant, hence the title. After Derek says this Chris shots the policeman on the arm. I do think that this was just a lucky shot out of the blue After been struck in the arm the policeman runs to the door were all the other policemen are standing waiting for the order to arrest, shouting for a gun. H then comes back up the stairs with this gun. As he gets on to the roof another police officer comes out to to get Derek, but by doing so, Chris shoots at him and kills the officer by a bullet wound to the head. Kassandra McDonald ...read more.