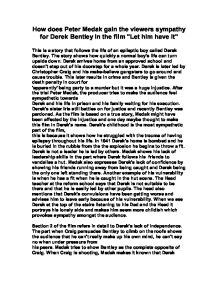 How does Peter Medak gain the viewers sympathy for Derek Bentley in the film &quot;Let him have it&quot;

How does Peter Medak gain the viewers sympathy for Derek Bentley in the film "Let him have it" This is a story that follows the life of an epileptic boy called Derek Bentley. The story shows how quickly a normal boy's life can turn upside down. Derek arrives home from an approved school and doesn't step out of his doorstep for a whole year. Derek is later led by Christopher Craig and his make-believe gangsters to go around and cause trouble. This later results in crime and Bentley is given the death penalty in court for 'apparently' being party to a murder but it was a huge injustice. After the trial Peter Medak, the producer tries to make the audience feel sympathetic towards Derek and his life in prison and his family waiting for his execution. Derek's sister Iris still battles on for justice and recently Bentley was pardoned. As the film is based on a true story, Medak might have been affected by the injustice and one day maybe thought to make this film in Derek's name. Derek's childhood is the most sympathetic part of the film, this is because it shows how he struggled with the trauma of having epilepsy throughout his life. ...read more.

It is clear that Bentley hasn't got the mind of a hardened criminal when he says 'My Dads going to kill me'. Even though Bentley is older than Craig, Medak makes Craig the leader of the two and makes Craig seem like he knows what he is doing more than Bentley does. Craig is presented as a wannabe gangster from Chicago. We can tell because throughout the film he puts on the accent of a gangtser and when he is shooting he is actually acting like one of them. Medak presents Craig as a wild character so that the audience can easily notice the contrast between him and Bentley When Derek realises he has still got the stolen butcher's keys he throws them off the roof and says 'if they catch me with these'. When Bentley is being questioned in court he panics and can't really answer properly because of his mental state. Medak purposely does this to to show the audience that Bentley isn't mature enough to even appear in court. Medak makes it seem as if Bentleys' being interrogated by making the camera track across the courtroom to show everyone staring at him, this makes us feel sorry for Bentley. ...read more.

The sympathy continues to build up until Derek's death. Medak's best camera work is just after the execution, the camera closes down on the house from the sky, goes through the roof in to Derek's room through the house to the frontroom. The camera then reveals Derek's family hugging each other and crying. When the clock stops chiming for nine o'clock it creates a bigger impact on the audience because the sound of the clock ends just after nine and so did Derek's life. When Mr Bentley and his family try to say their final goodbyes to Derek this is very poignant because the wired glass prevents them from doing so. When the film ends I think the music is perfect because it's dull and sad, the black screen with white writing also suits the mood because someone has just died. I think the reason for making the film is because Medak doesn't agree with injustice so he wanted to make a point. He also wanted to show the real Derek Bentley and give him the chance that he never had to show the kind of person that he really was. The film creates a sympathetic view of a situation that was beyond Derek Bentley's control that ended in such a tragic and unfair way. ...read more.