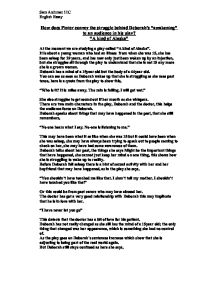 How does Pinter convey the struggle behind Deborah's &quot;awakening&quot; to an audience in his play &quot;A kind of Alaska&quot;?

How does Pinter convey the struggle behind Deborah's "awakening" to an audience in his play? "A kind of Alaska" At the moment we are studying a play called "A kind of Alaska". It is about a young woman who had an illness from when she was 15, she has been asleep for 29 years, and has now only just been woken up by an injection, but she struggles all through the play to understand that she is not 15 any more she is a grown women. Deborah has a mind of a 15year old but the body of a 44year old. You can see as soon as Deborah wakes up that she is struggling as she uses past tense, here is a quote from the play to show this, "Who is it? It is miles away. The rain is falling. I will get wet." She also struggles to get sound out if her mouth as she whispers. There are two main characters in the play, Deborah and the doctor, this helps the audience focus on Deborah. ...read more.

I think he's dreaming. He wakes me up. He's my best dog though. I talk French." In that sentence it shows that Deborah is still struggling as she says she can't get to sleep but really she has been asleep for 29years. Deborah doesn't really have much from her life before, she only has a few images from her childhood, as she has missed out most of her adult life. Pinter uses this idea as an important part of conveying Deborah's struggle, as she is forced to understand what has happened to her. At this point of the play Deborah is beginning to adjust to the surroundings she wakes up to. A quote to show this is, "She looks at him for the first time" In the play Pinter doesn't really involve Deborah's family, until she says, "I've not seen Daddy today. He's funny. He makes me laugh. He runs with me. We play with balloons." We have only been in contact with Deborah and the doctor so this makes this part of the play more significant. ...read more.

Deborah is annoyed with Pauline, but we don't really know why, it may be something Pauline did before she had this illness. When Deborah looks down at herself for the first time she realises that she is slimmer, she does not understand at all. But when Pinter decides to let Deborah know the truth, she starts to understand what has happened to her. But she has a fear of going back to sleep, as she didn't like it. Pinter shows the audience what it was like for Deborah to be asleep for that amount of time by Deborah having images, showing the distress it caused her. At the end of the play Deborah finally comes to grasp of what has happened to her. Pinter wrote the play like this to show the audience what it is like for someone to be asleep for that long a time, how hard it would be for someone to wake up and understand what has just happened to them, and how they would feel. I think it is good as it builds up the audience's tension all through the play. Sam Archman 11C English Essay ...read more.