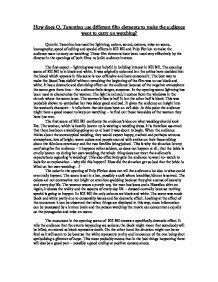 How does Q. Tarantino use different film elements to make the audience want to carry on watching?

How does Q. Tarantino use different film elements to make the audience want to carry on watching? Quentin Tarantino has used the lightning, colour, sound, camera, mise-en-scene, iconography, speed of editing and special effects in Kill Bill and Pulp Fiction to make the audience want to carry on watching. These film elements have been used very effectively by the director in the openings of both films to build audience interest. The first aspect - lightning was very helpful in building interest in Kill Bill. The opening scene of Kill Bill is in black and white. It was originally coloured but the critics have decided that the blood which appears in this scene is too offensive and have censored it. The best way to make the blood 'less visible' without remaking the beginning of the film was to use black and white. It has a dramatic and disturbing effect on the audience because of the negative atmosphere the scene gets them into - the audience feels danger, suspense. In the opening scene lightning has been used to characterise the woman. The light is natural; it comes from the windows in the church where the scene is set. The woman's face is half lit but the other half is black. ...read more.

This represents a specific film producing company straight from Japan. It gives a sense of 'old school' and tells the audience that the film is original because very seldom producers refer to 'old school'. In the first five-minute periods of the two films studied - Kill Bill and Pulp Fiction the director uses camera positions/effects and speed of editing to make the movies more interesting and have a particular effect on the audience. The opening of Pulp Fiction is a good example of how the camera with increased speed of editing can build interest. As the two characters are having a conversation in the bar, the camera is concentrating more on the woman every moment. Jump cuts are used to change the focus from the man to the woman and vice versa quickly. This is effective because the audience at this moment asks the questions "Why is the speed being increased?" On the impatient audience it might have a very different effect - it could annoy them. The camera changes so quick that the audience cannot see the last part of the previous cut, tries to concentrate on the next one still thinking about the previous cut but suddenly the cut changes again. This is how Quentin Tarantino plays with the audience - he does not reveal information that the characters might have given out at the end of the cut to make the audience want to watch. ...read more.

The non-linear plot has been shown in Kill Bill and Pulp Fiction by the director. The point of this is to keep the audience interested until the last line of the movie. The non-linear story has helped to achieve this because it told the audience how the story was finished but it did not give them a clue how it all started. By paying a lot of attention to the first scene, which is the ending, and making it interesting, full of iconography, dynamic effects, original sound etc. the director built himself a great tool for keeping the audience until the whole plot is justified. A non-linear plot is also 'unique' to films directed by Quentin Tarantino, by whom this style has been developed. If I was Quentin Tarantino, I would call my new film 'Contradiction'. I think that it would fit the 'Tarantino style' of things in the wrong order. It links with the theme of paradox, for example one thing denies another, but that other thing seems true. The same can be spotted in Tarantino films - the end is at the beginning and the beginning at the end, so what is the beginning and what is the end in reality? Although the narrative is non-linear, in Tarantino's films there is always a clear key, consequence that justifies the plot. ...read more.