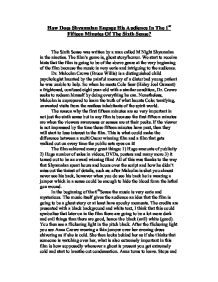 How Does Shyamalan Engage His Audience In The 1st Fifteen Minutes Of The Sixth Sense?

How Does Shyamalan Engage His Audience In The 1st Fifteen Minutes Of The Sixth Sense? The Sixth Sense was written by a man called M Night Shyamalan in the nineties. The film's genre is, ghost story/horror. We start to receive hints that the film is going to be of the above genre at the very beginning of the film because the music is very eerie and intriguing to the audience. Dr. Malcolm Crowe (Bruce Willis) is a distinguished child psychologist haunted by the painful memory of a disturbed young patient he was unable to help. So when he meets Cole Sear (Haley Joel Osment) a frightened, confused eight year-old with a similar condition, Dr. Crowe seeks to redeem himself by doing everything he can. Nonetheless, Malcolm is unprepared to learn the truth of what haunts Cole: terrifying, unwanted visits from the restless inhabitants of the spirit world. The reason why the first fifteen minutes are so very important in not just the sixth sense but in any film is because the first fifteen minutes are when the viewers awareness or senses are at their peeks. If the viewer is not impressed by the time those fifteen minutes have past, then they will start to lose interest in the film. ...read more.

After this touching moment Malcolm manages to char his way into convincing Anna to go upstairs with him to have s*x: Anna giggles as Malcolm's shadow stumbles across the bedroom. Malcolm turns on the bathroom light. A shaft of light shines upon Anna as she stands in the corner of the room with a smile on her face and pulls of her jumper as she sways to a pretend striptease song. Malcolm then joins in with this playing until he realises that Anna is no longer playing along with Malcolm but that her smile has completely gone and is no longer even facing Malcolm. He walks down toward her and realises that their bedroom window has been completely smashed and that their phone and vase have been knocked off the table. All of a sudden a shadow floats over the both of them from the bathroom and Anna screams! As Malcolm slowly approaches the bathroom the camera angle goes close up on a clearly disturbed man wearing nothing but a pair of white y-fronts of what could only be described as the type of underwear that would be worn by a 5 year old. This moment reflects upon what Cole says later on in the film "Sometimes you look at someone... ...read more.

The camera zooms into Malcolm's obviously full of pain face and goes all-dark. The screen goes very white which I believe signifies a new beginning (Malcolm's death) Now although they do not show to the viewer that Malcolm has died you later on find out that he is now also dead and is one of the many ghosts that haunts Cole however he is the one ghost that has ever attempted to help or to have a civil conversation without frightening Cole I think the first fifteen minutes of the film were outstanding! I think that it kept the audience intrigued and interested to what would happen next. I also believe that if anyone ever walked out of the film, it was not because they did dislike the film but that it scared them too much! Shyamalan is a very talented writer and he chose his cast very wisely. I think the main aspect that kept the audience intrigued was the acting done by Vincent Grey (Donnie Vahlberg) he was able to throw something more than out of the ordinary in both acting terms but also viewing terms! The camera angles and shots were very well done and all credit goes to Cole Sear (Haley Joel Osment) for his acting was above the best standard! ...read more.