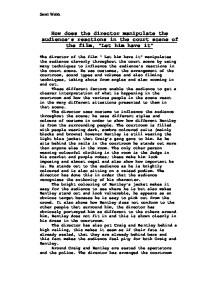 How does the director manipulate the audience&amp;#146;s reactions in the court scene of the film, &amp;#147;Let him have it&amp;#148;

How does the director manipulate the audience's reactions in the court scene of the film, "Let him have it" The director of the film " Let him have it" manipulates the audience cleverly throughout the court scene by using many techniques to influence the audience's reactions in the court scene. He use costumes, the arrangement of the courtroom, sound types and volumes and also filming techniques, taking shots from angles and also zooming in and out. These different factors enable the audience to get a clearer interpretation of what is happening in the courtroom and how the various people in the scene react in the many different situations presented to them in that scene. The director uses costume to influence the audience throughout the scene; he uses different styles and colours of costume in order to show how different Bentley is from the surrounding people. The courtroom is filled with people wearing dark, sombre coloured suits (mainly blacks and browns) however Bentley is still wearing the light blue jacket that Craig's gang gave to him. As he sits behind the rails in the courtroom he stands out more than anyone else in the room. ...read more.

His eyes are darting between the two men and have a distinctly hunted look, like a child who is about to be scolded for something he has done wrong. The audience, because of the actor's portrayal of Bentley's character as a weak and defenceless child, feels pity for Bentley. Derek Bentley is again portrayed as a child-like figure when the prosecution (Christmas Humphreys) is in the stands questioning him. At first he is only being questioned by Humphreys (who is seated directly in front of him.) Humphreys is questioning Bentley about the knuckle-duster and why he took it from Craig, Bentley replies: "Something I'd never had Sir, a gift" This line shows just how much of a child Bentley is, as most children accept any gift given to them on the principle that it is a gift and therefore must be accepted. This was the idea that Bentley was working on when he accepted the knuckle-duster from Craig. After a few minutes of questioning from Humphreys the Judge (seated on Bentley's left) joins in with his own questions, it now seems as if the two men are attacking Bentley, trying to force him to confess. ...read more.

has shown that it believes Bentley is guilty. The director has skilfully manipulated the mediums at his disposal in order to change what the audience feels towards Craig and Bentley and the other people in the courtroom; both directly and indirectly involved with the trial. The director has also picked up on what he imagines that the audience should be feeling about certain people and parts of the trial. He has used filming techniques, sound types and volumes, costumes, actors and acting techniques and also the arrangement of the entire set to try and make the audience feel the emotions that he had planned for them throughout the scene. Whether the audience had a positive or a negative reaction to certain sections of the scene was entirely down to the directors skilled directing of the scene and to how he wished his audience to react. Throughout the scene the director has recognised how the audience should react and has helped them to feel pity, anger and fear at different times during the scene. He has done this by manipulating the scene until he has changed it sufficiently to cause the audience to have emotions towards the courtroom scene and the people involved in it. ?? ?? ?? ?? Sarah Webb. ...read more.