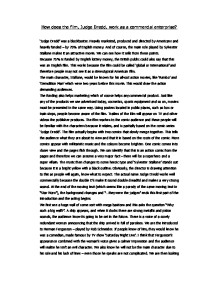 How does the film, Judge Dredd, work as a commercial enterprise?

How does the film, Judge Dredd, work as a commercial enterprise? 'Judge Dredd' was a blockbuster. Heavily marketed, produced and directed by Americans and heavily funded - by 75% of English money. And of course, the main role played by Sylvester Stallone makes it an attractive movie. We can see how it sells from these points. Because 75% is funded by English lottery money, the British public could also say that this was an English film. This works because the film could be called 'global or international' and therefore people may not see it as a stereotypical American film. The main character, Stallone, would be known for his all-out action movies, like 'Rambo' and 'Demolition Man' which were two years before this movie. This would draw the action demanding audiences. The funding also helps marketing which of course helps any commercial product. Just like any of the products we see advertised today, cosmetics, sports equipment and so on, movies must be presented in the same way. Using posters located in public places, such as bus or train stops, people become aware of the film. Trailers of the film will appear on TV and other videos the publisher produces. The film reaches to the comic audience and these people will be familiar with the characters because it relates, and is partially based on the comic series 'Judge Dredd'. ...read more.

The Computer Generated Imagery adds to the commercial side because the audience will be able to see the latest in technology. They arrive in 'Heavenly Haven' and a voice dictates "There is currently a riot in progress. Have a nice day!". This adds some humor, but also it tells the audience that the city is in a bad state and dangerous. The creators of the city (in the story) must know about the riots because it is programmed to be said by this voice. Herman then walks into his living accommodation. However it is taken over by people fighting a 'block war'. It is quite stereotypical - everyone has a weapon and there is lots of violence. I think these are done on purpose, as they are quite comical events - the director wants the audience to understand everything and therefore enjoy it more. People cannot say that this was a "complicated" or "hard to watch", another reason why it works as an enterprise movie. Two people then arrive on a motorcycle. We notice one is a woman due to her voice, which is a stereotypical calm, relaxed voice - telling us she is not the main character because she's too soft. The other is a rookie, referring to 'Sims' (simulators). Another stereotype of a guy that just wants to get straight into the action. They call for backup and the scene swaps to a person in metallic armour. ...read more.

The super villain is portrayed as terribly evil as when we are introduced to him he is behind a mass of security systems. Large metal doors, hand print identification, automated weapons and many other devices, but finally a large force field. I think this represents that the villain must be kept on his own, and that he must be a superior criminal compared to the other people that can be kept in standard cells. He must be terribly evil. The warden then gives Rico, the villain, a badge case which turns into a gun (the prison didn't know this although you may expect them to scan everything that is sent to such an evil man... Yet I think it is obvious the villain would escape) and so he uses it to kill the head warden and two guards. The next time we see him in Mega City One. This comic movie, like 'Batman' or 'Spiderman' is viewed by people for the action, effects, cast and storyline. It is not meant to send out any moral message or be taken seriously, but be a film that is probably created for the director and producers to earn a lot of money. For that reason, it succeeds in the way that it actually set out what it is meant to be. There are barely any swear words in the movie meaning parents could take their children, bearing in mind it had an age rating of fifteen. Stallone, shooting everything up, being tortured, saving the city - could an action fan ask for more? ...read more.