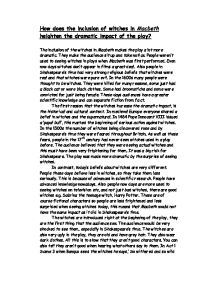 How does the inclusion of witches in Macbeth heighten the dramatic impact of the play?

How does the inclusion of witches in Macbeth heighten the dramatic impact of the play? The inclusion of the witches in Macbeth makes the play a lot more dramatic. They make the audience sit up and take notice. People weren't used to seeing witches in plays when Macbeth was first performed. Even now days witches don't appear in films a great deal. Also people in Shakespeare's time had very strong religious beliefs that witches were real and that witches were pure evil. In the 1600s many people were thought to be witches. They were killed for many reasons, some just had a black cat or wore black clothes. Some had broomsticks and some were convicted for just being female. These days audiences have a greater scientific knowledge and can separate fiction from fact. The first reason that the witches increase the dramatic impact, is the historical and cultural context. In medieval Europe everyone shared a belief in witches and the supernatural. ...read more.

In Act 1 Scene 3 when Banquo sees the witches he says,' So withered and so wild in their attire, that look not like th'inhabitants o'th'earth.' Macbeth says,' Speak if you can: what are you?' Also the witches speak in rhyme. In Act 1 Scene 3 the first witch says,'...I'll drain him dry as HAY: , Sleep shall neither night nor DAY.' In Shakespeare's day, if you spoke in rhyme you were definitely a witch. There are 3 witches and they speak about 3 and thrice etc, this is because 3 was considered an evil number. This would have scared the audience in Shakespeare's day and heighten the dramatic impact of the play. The setting and sound effects also heighten the dramatic impact of the play. At the start when the witches first appear they're in a 'desolate place', this means nothing is there e.g. a desert. The play also starts with thunder and lightning which would surprise and perhaps make the audience jump. Also when the witches re-appear later on in the play , there is again thunder. ...read more.

The first witch says, ' Round about the cauldron go ; In the poisoned entrails throw...' The second witch talks about, ' ..eye of newt and toe of frog, wool of bat and tongue of dog...' The third witch talks about a half woman, half bird creature. This would have been frightening for the people in Shakespeare's day because they would have believed that all of these things could really happen. In conclusion, the witches have a big hand in the dramatic impact of the play to Shakespeare's audience, however they would not have the same impact on today's audience. This is because people are much more well educated nowadays. Things like the language, the rhyme and 'thrice' would not bother today's audience, it wouldn't scare shock or excite them and therefore not increase the dramatic impact of the play. But in Shakespeare's time the people actually believed strongly in these things so it frightened them, there are many differences in today's audience and Shakespeare's audience and there will be a big change in the views of the audience in 400 years this is because the world is always changing. ...read more.