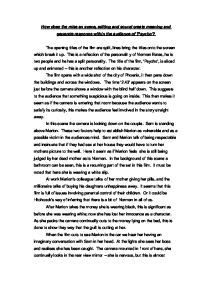 How does the mise en scene, editing and sound create meaning and generate response within the audience of 'Psycho'?

How does the mise en scene, editing and sound create meaning and generate response within the audience of 'Psycho'? The opening titles of the film are split, lines bring the titles onto the screen which break it up. This is a reflection of the personality of Norman Bates, he is two people and he has a split personality. The title of the film, 'Psycho', is sliced up and animated - this is another reflection on his character. The film opens with a wide shot of the city of Phoenix, it then pans down the buildings and across the windows. The time '2.43' appears on the screen just before the camera shows a window with the blind half down. This suggests to the audience that something suspicious is going on inside. This then makes it seem as if the camera is entering that room because the audience wants to satisfy its curiosity, this makes the audience feel involved in the story straight away. In this scene the camera is looking down on the couple. Sam is standing above Marion. These two factors help to establish Marion as vulnerable and as a possible victim in the audiences mind. ...read more.

When Norman returns with Marion's supper we learn that his hobby is stuffing dead animals, taxidermy. This is quite significant as he take care of his dead mother and preserves her. After their conversation, in which we learn that Norman slightly mentally unstable, Marion returns to her room. Norman walks to the parlour shuts the door behind him and takes down a picture of a n**e woman to reveal a jagged peephole - all of this combines to symbolise feminine sexuality. Norman looks through the hole, his eye illuminated by the light from the bedroom. The camera angle shifts to his point of view, at this point the audience feel as if they are watching her, making them share Normans guilt. Just as Marion is about to take everything off the camera shifts again to give a side on close-up of Normans eye, not blinking, infixed upon her. Back at his house we see Norman fighting with his mind as to whether he is going to kill Marion. The camera (his mother?) looks down on him. Back at room 1 we see Marion working out how much she will have to pay back to her employer, once she has done this she flushes the evidence down the toilet. ...read more.

The audience becomes horrified by how gory the scene is (and perhaps by the nudity), when in fact no naked parts of her body are seen and the only blood on screen is in the bottom of the bathtub. Once the killer has left the shot of Marion's hand is significant, it is close up the heighten the emotions felt by the audience at this time, and show her hand slipping down the tiles as her life slips away. The next shots combine to create an overall sinking sensation, the feeling of things slipping away; she tries to grab the curtain but it slips off the rails and she falls to the ground. The camera then cuts to the showerhead to show the irony that the same showerhead that was washing away her guilt is now washing away her blood, and therefore her 'life'. This film is hailed as being the first ever slasher movie, as no other film before it depicted murder in such a graphic fashion (it isn't really that graphic but we are 'fooled' to believe it is). It must also be noted that this film was the first one to show a flushing toilet! Future movies in which victims were killed in such brutal fashion used the same style of high pitched music. ...read more.