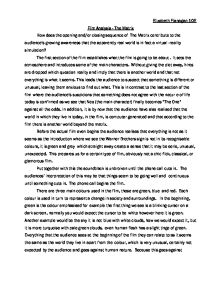 How does the opening and/or closing sequence of The Matrix contribute to the audience's growing awareness that the apparently real world is in fact a virtual-reality simulation?

Elizabeth Flanagan 10E Film Analysis - The Matrix How does the opening and/or closing sequence of The Matrix contribute to the audience's growing awareness that the apparently real world is in fact a virtual-reality simulation? The first section of the film establishes what the film is going to be about. It sets the atmosphere and introduces some of the main characters. Without giving the plot away, hints are dropped which question reality and imply that there is another world and that not everything is what it seems. This leads the audience to suspect that something is different or unusual, leaving them anxious to find out what. This is in contrast to the last section of the film where the audience's suspicions that something does not agree with the nature of life today is confirmed as we see that Neo (the main character) finally becomes "The One" against all the odds. In addition, it is by now that the audience have also realised that the world in which they live in today, in the film, is computer generated and that according to the film there is another world beyond the matrix. Before the actual film even begins the audience realises that everything is not as it seems as the introduction where we see the Warner Brothers sign is not in its recognisable colours, it is green and grey which straight away create a sense that it may be eerie, unusual, unexpected. ...read more.

The car headlamps are used to blind us from seeing who is driving the lorry. The light provides a focus for the audience, who already are trying to think why these people seem to be enemies. In the film light also exaggerates a situation , for instance when Neo is alone in a room, the fact that it is a basic square shape, well-lit and pale coloured room emphasises that he is a small defenceless person in a big room, he is isolated and has no escape. However as well as light being used to show where the action is about to take place it is used to highlight an escape route or show the way for characters. For example, when the audience fears something is about to happen to Trinity, it is a lit up room that attracts her attention and she escapes diving through a window to the light. Then, later in the film when Neo has been told to follow the white rabbit, he nearly misses his chance but a girl moves so that light can shine on her shoulder making a tattoo of a white rabbit visible. In addition to this, the light often separates the agents from Neo and those helping Neo. In day light we can see that the agents are usually located in a dimly lit place, and Neo is well lit up. ...read more.

However, when Trinity kisses Neo whom she thinks is dead, he comes back to life and in this life he believes that he is the one and therefore he is the one. Relating to this, earlier in the film Neo says to Morpheus, "Are you trying to tell me I will be able to dodge bullets," Morpheus replies, "No I am telling you that when the time comes you won't have too!" Later in the film, Neo dodges bullets but because here Neo does not believe that he is the one, this is not the time Morpheus talks about. However, in his second life, when Neo is the one, he does not have to dodge the bullets, instead his strong belief means that he has the power to stop them in the air, which he does. Morpheus talked about this time. When the oracle tells Neo not to worry about a vase it is straight after that Neo knocks the vase causing it to fall and smash and then he starts to worry. This could relate to the audience in that way they do not notice something until it appears again later or until it is pointed out, they then start puzzling and looking for more, which may add to or confirm suspicions they had earlier made. By the end of the film, I would say it is clear to the audience that it is the mind that makes the matrix real, so the matrix is all in the mind! ...read more.