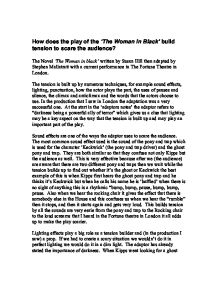 How does the play of the &amp;#145;The Woman in Black&amp;#146; build tension to scare the audience?

How does the play of the 'The Woman in Black' build tension to scare the audience? The Novel 'The Woman in black' written by Susan Hill then adapted by Stephen Mallatratt with a current performance in The Fortune Theatre in London. The tension is built up by numerous techniques, for example sound effects, lighting, punctuation, how the actor plays the part, the uses of pauses and silence, the climax and anticlimax and the words that the actors choose to use. In the production that I saw in London the adaptation was a very successful one. At the start in the 'adaptors notes' the adaptor refers to "darkness being a powerful ally of terror" which gives us a clue that lighting may be a key aspect on the way that the tension is built up and may play an important part of the play. Sound effects are one of the ways the adaptor uses to scare the audience. The most common sound effect used is the sound of the pony and trap which is used for the character 'Keckwick' (the pony and trap driver) and the ghost pony and trap. ...read more.

Also near the end when we see the Woman in black climb up a grand staircase upstage the banisters are made from a spotlight. But the most effective way in which it was used was when Kipps came stumbling inside the house and there was a light illuminating the only locked door in the house, this was effective because it as the only locked door in the house and this emphasises that something important is behind the door. This makes us, as the audience need to know what was behind it and what was going to happen to Kipps, all building up tension to scare the audience. Punctuation is very useful when you are reading the script it gives the actor more information on how the part is meant to be played e.g. "But no-one had been there! No-one!" gives the actor the idea that he's meant to play the part, for this example it is scared. Also when Kipps has just had a ghostly experience he talks to himself in rhetorical questions "How can I explain". This adds the feeling that he might think that he's dreaming or going crazy, which confuses us which makes the tension build and build inside us wondering what's happening next. ...read more.

it is roaring around the house" and we see the Woman in Black. This adds tension because when the tension declines we get a feeling that it will shoot back up to a high point again and this makes the audience feel tense. Overall I think that it was a very successful adaptation and I thought the version I saw at the fortune theatre in London was excellent, with very few props just added to the effect that it was done with no plan or organisation. I think the tension is created on stage then raised by our imagination. In my opinion it was the combination of Lighting, Sounds and How the actor shows us his feelings with a range of techniques including pauses and how the actor puts forwards his words it all adds up to create the tension to make us scared. The only part that I felt was poor was when the real Kipps said he didn't hire an actor and he didn't know what the man was talking about, I thought it was a corny end to an otherwise good and successful adaptation of Susan Hill's Novel. ...read more.