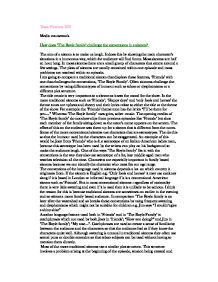 How does 'The Royle family' challenge the conventions in a sitcom?

Tessa Neathey 10N Media coursework How does 'The Royle family' challenge the conventions in a sitcom? The aim of a sitcom is to make us laugh. It does this by showing the main character's situations in a humorous way, which the audience will find funny. Most sitcoms are half an hour long. In most sitcoms there are a small group of characters that centre around a few settings. The plots of sitcoms are usually contained within one episode and most problems are resolved within an episode. I am going to compare a traditional sitcom that displays these features, 'Friends' with one that challenges the conventions, 'The Royle Family'. Often sitcoms challenge the conventions by using different types of humour such as taboo or dysphemisms or a different plot structure. The title music is very important to a sitcom as it sets the mood for the show. In the more traditional sitcoms such as 'Friends', 'Happy days' and 'only fools and horses' the theme tunes are upbeat and cheery and their lyrics relate to either the title or the theme of the show. For example the 'Friends' theme tune has the lyrics "I'll be there for you...." ...read more.

This can have either a positive or a negative impact on the audience. It can make the audience want to carry on watching if they have started watching at the beginning of the storyline or feel isolated if they have started watching the storyline near the end of the series. On the other hand 'The Royle family' does not have plots contained within one episode and if a problem is introduced then it won't be solved within the same episode. This can create a sense of familiarity with the audience as they have slow moving storylines. This is another way that 'The Royle family' breaks the conventions of a sitcom. The types of humour used in sitcoms both conventional and un-conventional depend greatly on the personality of the character. For example in 'The Royle family' Denise is portrayed as quite a dim-witted character so the writers can use pratfalls effectively as to the audience these seem almost normal to the character. Another example would be Chandler from 'Friends' who uses sarcasm on some of the other, slower characters such as 'Joey' so that the audience can laugh at the character on the receiving end of his sarcasm. ...read more.

The effect of not having laughter canned or otherwise in 'The Royle family' makes the audience have to discover the humour themselves and laugh at the jokes they find funny not just the ones which are supposed to be. In conclusion after looking at all the evidence I can clearly see that 'The Royle family' not only challenges the conventions but also breaks them. It uses a different plot structure and a slower dialogue. Although it challenges the 'rules' by which most sitcoms follow it does so with reason. It is on later than a lot of sitcoms and is not aimed at a family audience. 'The Royle family' tries also a lot of different ways of presenting the sitcom and includes different types of camera shots and extreme close ups. There are no sound effects other than everyday sounds in 'The Royle family' and there is no use of canned laughter or a studio audience either. The language used in 'The Royle family' is almost always informal, uses dysphemisms and swearing. But saying all this there are still ways that it sticks to the conventions. It is the same length as most sitcoms and uses stereotypes effectively. Although 'The Royle family' keeps to the rules it could never be classed as a 'traditional' sitcom. ...read more.