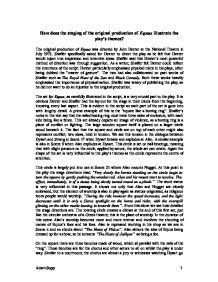 How does the staging of the original production of Equus illustrate the play&amp;#146;s themes?

How does the staging of the original production of Equus illustrate the play's themes? The original production of Equus was directed by John Dexter at the National Theatre in July 1973. Shaffer specifically asked for Dexter to direct the play as he felt that Dexter would inject true inspiration and inventive ideas. Shaffer said that Dexter's most powerful method of direction was through suggestion. As a writer, Shaffer felt Dexter could reflect the intentions of the script. Dexter particularly emphasised physical mime in his plays, often being dubbed the "master of gesture". The two had also collaborated on past works of Shaffer such as The Royal Hunt of the Sun and Black Comedy. Both these works heavily emphasised the importance of physical action. Shaffer was weary of publishing the play, as he did not want to do an injustice to the original production. The set for Equus, as carefully illustrated in the script, is a very crucial part to the play. It is obvious Dexter and Shaffer had the lay out for the stage in their minds from the beginning, knowing every last aspect. This is evident in the script as each part of the set is gone into with lengthy detail. A prime example of this is the "square like a boxing ring". Shaffer's notes in the text say that the railed boxing ring must have three sides of enclosure, with each side being like a fence. ...read more.

This is shown in Scene 25 when Dysart pours his sorrows out to Hesther. The whole set can mirror that of an Ancient Greek theatre. In the Greek times there was a circular "orchestra" in the middle of the theatre, just before the stage. In this area the altar would stand, which is what the Greeks would worship to, and the actors would act. Equus is essentially about worship, and so it is appropriate that the set was put on a circle. The actors in a Greek theatrical performance would also always be in view just like the benches seen in Equus. Incidentally the Greek word for theatre; "theatron" literally translates to "seeing-place" which his what Alan is so afraid of, being seen by Equus. The most important thing about the horses in Equus is that they are only representative. They are a creature of Alan's imagination. In Shaffer's notes he takes particular care to say that the horses in Equus should in no way be real. He says that anything that can suggest the familiarity of a real animal, or worse still, a pantomime horse, should be thoroughly avoided. "The horses are only representing animals and are in no way literal. The horses wear chestnut velvet coloured track suits with light strutted hooves, four inches high, set on metal horse shoes on their feet. ...read more.

He realises that instead of getting rid of Equus from Alan, he has now passed it on to him self: "And now for me it never stops: that voice of Equus out of the cave". He first off tells Alan that he will soon be cured saying, "You'll never see him [Equus] again, I promise". Then he admits that he is lying and that Equus will leave tearing Alan apart if he does leave at all, "When Equus leaves - if he leaves at all - it will be with your intestines in his teeth". Dysart's last words are "There is now, in my mouth, this sharp chain. And it never comes out". The effect of these words on the audience is very large as everyone now knows that Alan's pain has handed itself over to Dysart. Equus will not leave, but just transfer from person to person. All through the play Dysart slowly realises that the warped figure of Alan is actually what he craves, he wants Alan's sense of worship, and eventually he gets exactly that, but with Equus attached. There is next a long pause of Dysart just sitting, staring and then a blackout. But unfortunately for Dysart, Equus will never leave and turn of the lights. The play may have finished, but the pain of Equus will last with him forever. However, all through the play Dysart yearns for Alan's worship so therefore maybe he is happy, in a perverse way. Adam Sopp 2 Adam Sopp 1 ...read more.