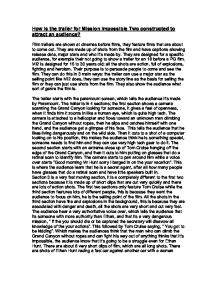 How is the trailer for Mission Impossible Two constructed to attract an audience?

How is the trailer for Mission Impossible Two constructed to attract an audience? Film trailers are shown at cinemas before films, they feature films that are about to come out. They are made up of shots from the film and have captions showing release date, major stars and who it's made by. They are designed for a specific audience, for example their not going to show a trailer for an 18 before a PG film. MI2 is designed for 15 to 30 years old; all the shots are action, full of explosions, fighting and heroism. Their purpose is to persuade people to come and see the film. They can do this in 3 main ways: the trailer can use a major star as the selling point like MI2 does, they can use the story line as the basis for selling the film or they can just use shots from the film. They also show the audience what sort of genre the film is. The trailer starts with the paramount screen, which tells the audience it's made by Paramount. The trailer is in 4 sections; the first section shows a camera scanning the Grand Canyon looking for someone, it gives a feel of openness, when it finds him it zooms in like a human eye, which is quite high tech. ...read more.

The proper sound track starts when the computer finds Ethan Hunt, the sound track is linked with the first mission impossible so if the audience didn't already know it was mission impossible trailer the audience would after hearing it. The soundtracks gets louder and faster in section 3 as the fighting and driving scenes are shown to emphasise the danger and the speed of the clips. The Mission Impossible Two trailer has been designed to attract a certain audience; in this case it is 15 to 30 year olds. They try to attract that audience by using action clips of fast cars, motorbikes, beautiful women, and a gun-toting hero, the sort of thing 15 to 30 year olds enjoy. The whole trailer is based around Tom Cruise; they are using him as the selling point of the film. In the first section they focus on one man, his identity is revealed slowly so the audience don't know what the trailer is for so the audience stay and watch to find out. The audience don't know who he is or what he's doing or why. But the audience can take an educated guess after all the hype in the magazines and newspapers. ...read more.

If the proper music came in at the start the audience would know what it was straight away and the audience wouldn't stay to watch. The most important dialog is "This mission will self destruct in 5, 4, 3, 2, 1(almost like a catchphrase). This links it to the first mission impossible films and the TV series. People who saw the TV series would recognise it and would want to go and see it. The man who does the voice over sounds quite old as if he is Ethan's superior in years and experience. The voice over is male because it sounds more authoritative; in most films like this the superior is male. It's like in the James Bond, the man he goes to see in the big office up in London. I think that this trailer be very successful because it features Tom Cruise and gives the audience an insight into the film. There are also some action shots, which will attract the teenagers. It attracts the audience it is written for very well because it has shots of Tom Cruise, which will attract women who have crushes on him. Because it is linked to the first mission impossible and the TV series it is going to attract people who saw the first film and the TV series. They try to attract men with the action and the women with Tom Cruise. ...read more.