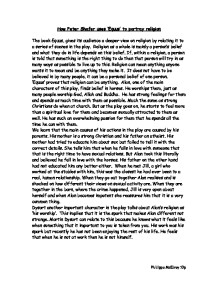 How Peter Shafer uses 'Equus' to portray religion The book Equus, gives its audience a deeper view on religion by relating it to a series of scenes in the play. Religion as a whole is mainly a person's belief and what they do in life depends on this belief. If, within a religion, a person is told that something is the right thing to do then that person will try in as many ways as possible to live up to this. Religion can mean anything anyone wants it to mean and be anything they make it. It does not have to be believed in by many people, it can be a personal belief of one person. 'Equus' proves that religion can be anything. Alan, one of the main characters of this play, finds belief in horses. He worships them, just as many people worship God, Allah and Buddha. He has strong feelings for them and spends as much time with them as possible. Much the same as strong Christians do when at church. But as the play goes on, he starts to feel more than a spiritual love for them and becomes sexually attracted to them as well. He has such an overwhelming passion for them that he spends all the time he can with them. We learn that the main causes of his actions in the play are caused by his parents. ...read more.

Frank could never understand the importance of the Bible or of any religious beliefs of any sort. When Alan was younger he had not thought twice about the stories because he didn't see them as a problem but now he is sure it is because of them. Equus therefore leaves a lot of unanswered questions which keep the audience interested in the play and makes them want to find out the answers. Alan's relationship with Dysart Alan is sent to see a psychiatrist who happens to be Martin Dysart. Alan starts off by only answering Dysart with songs and jingles from adverts. But soon he begins to open up fully and truthfully to Dysart and they begin to become friends. Not only does Alan start to talk about himself and his past but he also analyses Dysart too. He tells Dysart that if he asks a question then Alan will ask him one in return. Alan then starts to feel more comfortable with Dysart and shares everything with him. By the end of the play they are very close but at the beginning this would not have seemed possible Dysart begins to realise that Alan is not just another patient. He begins to envy him and starts to question himself. Dysart starts his therapy with Alan by asking him typical psychiatrist questions which trick Alan into saying things he would normally refuse to tell ...read more.

How he reacts to Dysart's questions in scene 3 onwards, gives the audience the impression that Dysart and Alan are 2 very different people, and that gives the audience the impression that they Dysart and Alan will never properly understand each other, and may never have anymore of a relationship than what they started of with. Dysart pushed the relationship because he was being paid for it, but once they got closer and began to understand each other, and then they both made an effort because they wanted to and not because they had to. Without Dysart making Alan think that he wanted to talk to him and get to know him, Alan may not have trusted Dysart the way he did and then nothing would have been achieved, but in the end they made their relationship work because they wanted to, which showed that they both genuinely y wanted to share their feelings and emotions. So in the end, Alan and Dysart had developed a relationship based on trust and honesty, and that was extremely unexpected, and was a big shock to the audience of the play and the viewers of the film. But they connected with each other and felt they could talk and open up their hearts and souls, which in the end helped them both. ?? ?? ?? ?? Phillippa McElroy 10p ...read more.