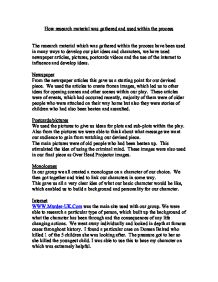 How research material was gathered and used within the process of writing a play.

How research material was gathered and used within the process The research material which was gathered within the process have been used in many ways to develop our plot ideas and characters, we have used newspaper articles, pictures, postcards videos and the use of the internet to influence and develop ideas. Newspaper From the newspaper articles this gave us a starting point for our devised piece. We used the articles to create frozen images, which led us to other ideas for opening scenes and other scenes within our play. These articles were of events, which had occurred recently, majority of them were of older people who were attacked on their way home but also they were stories of children who had also been beaten and assaulted. Postcards/pictures We used the pictures to give us ideas for plots and sub-plots within the play. Also from the pictures we were able to think about what message we want our audience to gain from watching our devised piece. The main pictures were of old people who had been beaten up. This stimulated the idea of using the criminal mind. These images were also used in our final piece as Over Head Projector images. Monologues In our group we all created a monologue on a character of our choice. We then got together and tried to link our characters in some way. This gave us all a very clear idea of what our basic character would be like, which enabled us to build a background and personality for our character. Internet WWW.Murder-UK.Com was the main site used with our group. We were able to research a particular type of person, which built up the background of what the character has been through and the consequences of any life changing actions. We went away individually and looked in depth at famous cases throughout history. I found a particular case on Doreen Baired who killed 1 of the 5 children she was looking after. ...read more.

are being watched but they are unable to see through them, but also when we researched them we found they were too expensive and we had no place to hang them from the ceiling. Through out the duration of our play we will be using coloured gels to create different atmospheres. Blue gels to represent the criminal's life when they were happy and with out a motive to kill, Red gels to represent the anger in which the criminal feels while committing the crime and finally Purples gels to represent the criminals confused state of mind. Our audience were seated in a diamond shape, this was in order for them to have a view of all what was happening and also to symbolise that they were having different prospective on people's lives. When getting into character we found Stanislavki's relaxation technique helped our character greatly. This made me focus more when acting; this also made me feel like I was acting with a purpose which was what Stanislavski wanted his actors to feel when performing. I used the acting techniques of physicality, eye contact and characterisation to portray my character. I kept strong eye contact with the audience members, this I believed intimidated them and made them feel uncomfortable in their personal space. To get my characterisation and physicality I observed young people the age of 14, I was able to notice a particular girl in the school canteen who was with he friends, she seem rather shy, timid and introvert. This seemed the perfect example for the character of Cassie Whatts. Our design element was extremely minimal. In the beginning of our devising we want our set to have a clinical feeling to it but as the play progressed we decided this was not the best option. Our backdrop was minimal also and did not give away any of the plays plot. The backdrop had the title of the play "Just Another Headline" with nothing else. ...read more.

The main stimulus, which influenced our main focus for out play, was newspaper pictures, which were of battered elderly people. We discussed as a group that we wanted to look into the criminal's side of the story as the victims are often investigated. Our drama teacher gave another stimulus to us, which was song words/poem. When we looked at the poem we realised this did not have any association with the themes raised. A piece of music was bought in by a group member this was a stimulus which influenced our Physical Theatre piece. The music gave us a beat to work with so we were able to move in time and with out any hazards. " What was the impact of social cultural and or historical conditions on the work" Just Another headline focuses on all different social backgrounds. Each of the characters are from different classes including working, middle, lower and upper. The different characters backgrounds mean they speak and judge different situations differently for example the character of Zhara Wallis was a lesbian at this point in the play she is lower class as she has been kicked out of her home because of this. This shows that Zhara may have been bought up from a good social background and this type of behaviour would not have acceptable from this social class. Cassie Watts was from a middle class family with a good up bringing, murders are unheard of within her family. These characters are all based on real people from the past. The character of Cassie Watts was based on a lady called Doreen Baired from the 1950's who killed a baby who was the age of eight months. Doreen was babysitting five children and this particular baby was crying more than the others, she reached her boiling point and strangled the baby. The quotes used in the play are all taken from historical events, which have occurred. ...read more.