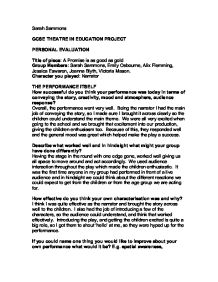 How successful do you think your performance was today in terms of conveying the story, creativity, mood and atmosphere, audience response?

Sarah Sammons GCSE THEATRE IN EDUCATION PROJECT PERSONAL EVALUATION Title of piece: A Promise is as good as gold Group Members: Sarah Sammons, Emily Osbourne, Alix Flemming, Jessica Eswaren, Joanna Blyth, Victoria Mason. Character you played: Narrator THE PERFORMANCE ITSELF How successful do you think your performance was today in terms of conveying the story, creativity, mood and atmosphere, audience response? Overall, the performance went very well. Being the narrator I had the main job of conveying the story, so I made sure I brought it across clearly so the children could understand the main theme. We were all very excited when going to the school and we brought that excitement into our production, giving the children enthusiasm too. Because of this, they responded well and the general mood was great which helped make the play a success. Describe what worked well and in hindsight what might your group have done differently? Having the stage in the round with one edge gone, worked well giving us all space to move around and act accordingly. ...read more.

Personally, I would like to have had time to improve the diction and pace of my voice. I tend to speak quite fast, and having time to improve on my diction could have made it easier for the children to understand and follow the story. How did a live audience affect your individual performance and the piece as a whole? The audience was very excited throughout the play and there were times when they refused to believe that the character Holly had 'gone missing'. And there were also times when the laughter was very loud and it took quite a long time for them to calm down before we could commence with the show. But all live audiences are different, depending on their age group or enthusiasm, and as an actress I know never to expect something to come, because everything is always on the spur of the moment and I have to be ready for that! WORKING PROCESS - I.E. ...read more.

A lot of the group changed characters at times too, which was difficult as we had to make sure everyone knew their part and knew exactly how their character was feeling at each moment in the play. What have you learnt about creating Theatre in Education? Refer to your original research, the workshops we did, the rehearsals you had in your group, the work you saw others create and the final day at the primary school. From the original research I did on Oily Cart, it is clear that all Theatre in Education productions have to be big, bold, and colourful with lots of audience interaction, so as to keep the children interested throughout the play. We saw others create similar pieces and all of them had a lot of interaction with the audience. The final day at the primary school was much different to what I expected, the general enthusiasm which came across from the children, helped us make the whole play a success, using all the techniques we had learnt from looking at others using Theatre in Education. ...read more.