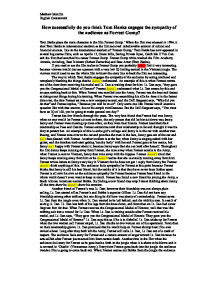 How successfully do you think Tom Hanks engages the sympathy of the audience as Forrest Gump?

How successfully do you think Tom Hanks engages the sympathy of the audience as Forrest Gump? Tom Hanks plays the main character in the film Forrest Gump.' When the film was released in 1994, it shot Tom Hanks to international stardom as the film received unbelievable amount of critical and financial success. Due to the international stardom of 'Forrest Gump,' Tom Hanks has now appeared in several big names films, such as Apollo 13, Green Mile, Saving Private Ryan, Catch Me If You Can and the film that launched his career Forrest Gump. Forrest Gump white washed the Film Academy Awards, including, Best Director (Robert Zemeckis) and Best Actor (Tom Hanks). If you read or see the film trailer to Forrest Gump you probably won't find it very interesting because viewers would just see a person with a very low IQ fooling around in the Vietnam jungle. The viewers would need to see the whole film to know the story line to back the film see interesting. The way in which Tom Hanks engages the sympathy of the audience by acting confused and completely blanking the things that he doesn't understand. An example of this is when Forrest comes out of the door from receiving his medal and Lt. ...read more.

Forrest saves Lt. Dan from the jungle even when Lt. Dan wanted to be left behind, and die with his men. In result of saving Lt. Dan. Lt. Dan lost both of his legs from the knee down, and from then on Lt. Dan had never forgiven him for that. When Forrest receives the Congressional Medal of Honour, well that was like rubbing salt into a wound for Lt. Dan. When Lt. Dan is waiting outside after Forrest received his medal, and Lt. Dan says, "They gave you the Congressional Medal of Honour. They gave you the Congressional Medal of Honour." Lt. Dan says this as if he is in disbelief. Lt. Dan sticks up for Forrest when the two women call Forrest stupid, Lt. Dan chucks to two women out of his apartment. From then on their relationship grows. Lt. Dan promised that he would help on Forrest shrimp boat if he ever owned a boat. Long after they both left the Army, Forrest still calls Lt. Dan, Lt. Dan out of a mark of respect. The audience feels sorry for Forrest and a certain amount of anger toward Lt. Dan because he acts selfish after Forrest just rescued him from certain death. Another time in the film when the audience feel sorry for Forrest as he goes back a forth to the jungle when it is about to be blown and it is covered in 'Charlie' (Vietnamese Army.) ...read more.

After Forrest thought about it for a second and some prompting from Jenny, he realised that Forrest Jr. was actually his son, so he went and sat next to his son and watched cartoons with him. When Forrest realises that he has a son the frustration on his face says more than words, you can tell that he doesn't know what to do next, he doesn't know how to be a farther. The audience feels sympathy because Forrest is terrified, and doesn't know what to In conclusion Tom Hanks as Forrest Gump engages the emotion and sympathy of the audience by getting in to situation and having very little or no reaction to the situation, this is what engages the sympathy of the audience, e.g. the death of Bubba. Forrest doesn't react to the death the same way has a normal person would. Forrest bottles up his emotions rather that letting them out in the open, and that is why he audience feels sympathy for Forrest. Tom Hanks acting in this film is amazing, the hardest of acting is a character that is simpleminded because you can't just act normally. You've got to imagine that you are that person, and you are acting like you normally would. The film 'Forrest Gump' is the main reason why I think Tom Hanks is one of the worlds best actors. Matthew Moullin English Coursework ...read more.