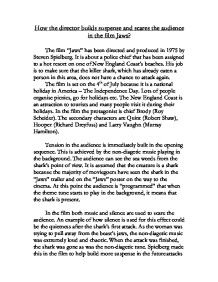 How the director builds suspense and scares the audience in the film Jaws? The film "Jaws" has been directed and produced in 1975 by Steven Spielberg. It is about a police chief that has been assigned to a hot resort on one of New England Coast's beaches. His job is to make sure that the killer shark, which has already eaten a person in this area, does not have a chance to attack again. The film is set on the 4th of July because it is a national holiday in America - The Independence Day. Lots of people organise picnics, go for holidays etc. The New England Coast is an attraction to tourists and many people visit it during their holidays. In the film the protagonist is chief Brody (Roy Scheider). The secondary characters are Quint (Robert Shaw), Hooper (Richard Dreyfuss) and Larry Vaughn (Murray Hamilton). Tension in the audience is immediately built in the opening sequence. This is achieved by the non-diagetic music playing in the background. The audience can see the sea weeds from the shark's point of view. It is assumed that the creature is a shark because the majority of moviegoers have seen the shark in the "Jaws" trailer and on the "Jaws" poster on the way to the cinema. At this point the audience is "programmed" that when the theme tune starts to play in the background, it means that the shark is present. ...read more.

Before the attack happened it could be predicted that both the boy Alex and the black dog could be the victims. The audience can see the parallelism between these two characters and the way they are presented. The same camera angles were used on Alex and the dog; when the angle used on Alex changed, the second camera, the one on the dog also moved up to suit the shots. The fact that the dog was black told the audience a lot as well. It is known that black represents extreme danger and death. The audience linked these two facts and realized that the dog will die as well. Spielberg has also used a specific color, which appeared everywhere to stimulate the suspence sense of the audience before anything happened. The director linked all the characters that 'lose something' by making them wear yellow. Alex's mother was wearing a yellow boater, the owner of the dog has a yellow t-shirt, Alex swam on a yellow lilo. Even on the beach yellow could be seen in many places. Spielberg has done this to help the audience predict which people will die in the future attacks. In fact he could have done this to make next attacks more effective. It is possible that the next victims will not wear yellow. This is common in Spielberg's films - the audience is made predict something, but the prediction does not meet the facts. This rises the audience up, and drops them down - makes the audience feel that they know, and disappoints them. ...read more.

I think that the scariest moment in the film is the first attack. It happened when Christy and her new friend went to the water to swim a bit. The man was drunk; he collapsed on the beach and fell asleep. A long shot of Christy swimming has been used. Suddenly the music started playing and the camera angle changed from high to low; it was tracking the girl. Christy stopped swimming for a minute, called the man by saying "Get in the water;" Suddenly the camera cuts to a shot of her legs from the shark's point of view. Here, the tension started to build quickly. The shark was getting closer, the tune was playing louder. More instruments joined the already chaotic music. The tune became extremely loud and camera angle changed again, showing Christy from a high angle. It was very scary when she felt that something was pulling her under the water because she had no return and no opportunity to swim away from whatever was trying to kill her. She was terrified. She started screaming and shaking her hands and trying to use force to get out of the shark's jaw. The scariest section of this scene was after the attack. The shark was gone and the non-diagetic music stopped playing. Dead silence came and all that could be heard were the sea waves. This was to show that nothing was left. It highlighted the fact that nobody came to help her even if anybody wanted to. She had no chance of surviving. The audience has been forced to acknowledge the horrible truth. I felt so sad after this... ...read more.