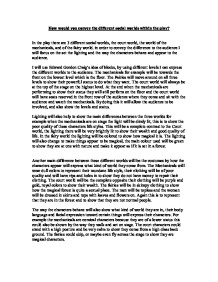 How would you convey the different social worlds within the play? In the play there are 3 different social worlds, the court world, the world of the mechanicals, and of the fairy world. in order to convey the difference to the audience I will focus on the set the lighting and the way the characters behave and appear to the audience. I will use Edward Gordon Craig's idea of blocks, by using different levels I can express the different worlds to the audience. The mechanicals for example will be towards the front on the lowest level which is the floor. The Fairies will move around on all three levels to show their powerful status to do what they want. The court world will always be at the top of the stage on the highest level. ...read more.

Another main difference between these different worlds will be the costumes by how the characters appear will express what kind of world they come from. The Mechanicals will wear dull colors to represent their mundane life style, their clothing will be of poor quality and will have rips and holes in to show they do not have money to repair their clothing. The court world will be the complete opposite their clothing will be purple and gold, royal colors to show their wealth. The fairies will be in skimpy clothing to show how the magical forest is quite a s****l place. The men will be topless and the women will be dressed in skirts and tops with leaves and flowers on. Again this is to represent that they are in the forest and to show that they are not normal people. ...read more.

I think the fairies could have a different range of accents and high pitched voices to make them seem small and delicate. Finally the setting is also going to help portray the worlds the most, the court setting again would use lots of rich gold colours and perhaps have large columns as it is set in Greece. Later on in the fairy world these columns could become phallic symbols. In the fairy world the colours will be more green to bring across the fact it is a forest. the mechanical world will be very basic and simple to represent the fact they have a simple lifestyle, there will be very little colour or props. All the social worlds will be portrayed very differently to make the worlds clearly distinctive to the audience. The initial impact will be mainly from visual aspects such as lighting, costume and setting. However the diacet and accent of characters from different social worlds will also define this. Emily Willis ...read more.