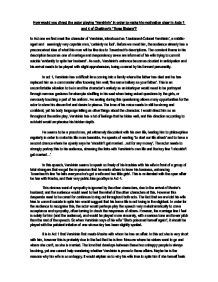 How would you direct the actor playing 'Vershinin' in order to make his motivation clear in Acts 1 and 4 of Chekhov's 'Three Sisters'?

How would you direct the actor playing 'Vershinin' in order to make his motivation clear in Acts 1 and 4 of Chekhov's 'Three Sisters'? In Act one we first meet the character of Vershinin, introduced as 'Lieutenant-Colonel Vershinin', a middle-aged and seemingly very capable man, 'certainly no fool'. Before we meet him, the audience already has a preconceived idea of what this man will be like due to Tusenbach's descriptions. The constant theme in his description becomes one of marriage and despondency as we are informed of his wife trying to commit suicide 'evidently to spite her husband'. As such, Vershinin's entrance becomes clouded in anticipation and his arrival needs to be played with slight apprehension, being covered by his forward personality. In act 1, Vershinin has a difficult time coming into a family where the father has died and he has replaced him as a commander after knowing him well; 'the same battery as your father'. This is an uncomfortable situation to be in and the character's anxiety as an interloper would need to be portrayed through nervous gestures for example shuffling in his seat when being asked questions by the girls, or nervously touching a part of his uniform. He seating during this questioning allows many opportunities for the actor to show his discomfort and desire to please. ...read more.

The affair clearly starts, as he desires to be loved, and so I think that the meetings between them in the final act would need to be played with much intensity and tenderness. The tone of his voice would need to change from the usual assuredness, to being a lot quieter and perhaps more anxiously. The movement in these scenes would need to be increased as the sense that what they are doing is wrong, deepens. If the audience were to pause the seen, Vershinin's expressions would need to be read as a mixture of uncertainty, love, anxiety, happiness and much indecision. Facially, more smiles would flicker across his face, and the actor would be in much lighter make up to show the relief of love. Act 4 concerns the parting of the two characters as Vershinin leaves. These scenes are the most intensely emotional in the entire play as the happiness of both characters is destroyed, and their found love must die. The character as a whole is much more silent throughout this act, reflecting his sorrow at leaving Masha. When he does speak, his pace would need to be significantly slowed as he tries to prolong every minute left with her. However, he does still spare a thought for his wife and children, showing that he is a loving man. ...read more.

Masha especially, is taken with Vershinin who has a maturity and experience beyond her dreary existence. In order to portray this to the audience, the actor playing Vershinin would perhaps have a darker skin tone than the isolated Prozorov's to show how well travelled he is; glasses stereotypically embody intelligence and education and even small things such as the way in which the character holds himself would suggest so. As he takes an interest in their house, this again would symbolize a curiosity associated with those whom travel. Therefore, a keen interest in artefacts on set would emphasize his well-travelled self and as such his knowledge on many things which are new to the sisters, like the affair. We see people brimming with hopes in Act I who have reached the end of their tether or have sunk into resignation by Acts III or IV. Vershinin's existing marriage veers into adultery in the desperate attempt to s****h at happiness, his philosophising becomes more harrowing as he realises that soon he will have to leave Masha and his wife tries to kill herself to 'spite him' yet again. Certainly, the life of Vershinin over the space of these acts is distressing, leading us to find many reasons for his behaviour and the behaviour of other characters towards him, like his wife. Directing the character would involve a lot of work upon nervous gestures and arrogance in Act 1, leading to sorrow and less movement in the final act. ...read more.