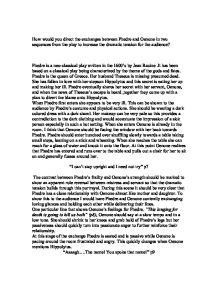 How would you direct the exchanges between Phedre and Oenone in two sequences from the play to increase the dramatic tension for the audience?

How would you direct the exchanges between Phedre and Oenone in two sequences from the play to increase the dramatic tension for the audience? Phedre is a neo-classical play written in the 1600's by Jean Racine .It has been based on a classical play being characterized by the theme of the gods and fates. Phedre is the queen of Greece. Her husband Theseus is missing presumed dead. She has fallen in love with her stepson Hippolytus and this secret is eating her up and making her ill. Phedre eventually shares her secret with her servant, Oenone, and when the news of Theseus's escape is heard ,together they come up with a plan to divert the blame onto Hippolytus. When Phedre first enters she appears to be very ill. This can be shown to the audience by Phedre's costume and physical actions. She should be wearing a dark colored dress with a dark shawl. Her makeup can be very pale so this provides a contradiction to the dark clothing and would accentuate the impression of a sick person especially in such a hot setting. ...read more.

"Aaaagh....The name! You spoke that name!" p9 Her former illness forgotten she should jump out of her seat and start to shout at a very quick tempo in high tones while quickly moving around the room and forcefully pushing Oenone away from her when she tries to comfort her. Oenone knows that she has touched a raw nerve and is eager to gain more information but Phedre tries not to say any more. This secrecy increases the dramatic tension for the audience because they are eager to find out more about Phedre's past while she is trying to conceal it. "I have said too much. Let us leave it" p10 When Phedre tells Oenone her love for Hippolytus she is extremely shocked and disgusted. She can collapse in a chair and place a hand on her chest while wiping her brow with the other. The exchange ends with Phedre launching into a long speech during which she should be very animated using a lot of gesticulation and movement. ...read more.

While she is doing this I would have her acting out the actions she is describing. So when she says, " to squeeze the life out of that woman", I would have her sink dramatically to her knees and hold her hands together over her head to mimic strangulation. At the end of this exchange Phedre is blaming Oenone for everything that has happened to her. "Get away from me." This greatly upsets Oenone as she was so close Phedre and I think that she should start to sob quietly and slowly walk out of the palace with her back hunched and her feet dragging on the floor. The last thing that Oenone would do is turn her head towards Phedre and throw a futile glance while Phedre points towards the door. This would reinforce the contrast between the relationship of the two characters from the earlier scenes. These two exchanges are vital for the audience to understand the characters of Oenone and Phedre and as a director I would want them to be played with great enthusiasm by the actors. All their gestures and mannerisms should deliberately add to the dramatic tension I would wish to build for the audience's enjoyment. ...read more.