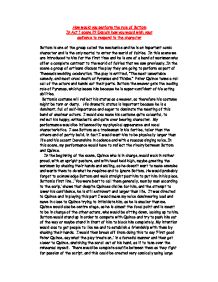 How would you perform the role of BottomIn Act 1 scene 2? Explain how you would wish your audience to respond to the character

How would you perform the role of Bottom In Act 1 scene 2? Explain how you would wish your audience to respond to the character Bottom is one of the group called the mechanics and he is an important comic character and is the only mortal to enter the world of fairies. In this scene we are introduced to him for the first time and he is one of a band of workmen who offer a complete contrast to the world of fairies that we saw previously. In the scene a group of artisans discuss the play they are going to perform as part of Theseus's wedding celebration. The play is entitled, "The most lamentable comedy, and most cruel death of Pyramus and Thisbe." Peter Quince takes a roll call of the actors and hands out their parts. Bottom the weaver gets the leading role of Pyramus, which pleases him because he is super-confident of his acting abilities. Bottom's costume will reflect his status as a weaver, so therefore his costume might be torn or dusty. His dramatic status is important because he is a dominant, full of self-importance and eager to dominate the meeting of this band of amateur actors. I would also make his costume quite colourful, to reflect his happy, enthusiastic and quite over bearing character. ...read more.

At this stage I would want my audience to respond, by thinking Bottom a rather loud mouthed bossy individual and have them feel sorry for Quince having to put up with such a disruptive member of the group. When finding out that I am 'a lover that kills myself most gallant for love' I will respond very dramatically, telling the actors how the audience will cry, as my acting will be so natural and emotional. I would hold my hands up to my heart to portray this and maybe pretend to hold out a sword to show how brave I am, even though I am just a lover and not a tyrant. I would also suggest other parts such as Ercles or a part to tear a cat in, to show my capabilities, and in doing this I would screw my face up to make me look vicious and claw my hands, frantically moving my arms back and forth as if I am attacking a cat. I can see myself in every role and when I recite my poem I walk around the whole stage, emphasising the words 'raging' almost spitting the words out to show my fury, and 'shivering' by holding my arms and trembling, with my teeth chattering. I would also push my hands out forcefully, thrusting my body forward, almost as if I was 'breaking' the locks of the prison gates.' ...read more.

I as Bottom, will stand next to Quince, nodding my head up and down, and looking down at the other actors as I am in charge too and I will announce ' we may rehearse most obscenely and courageously' throwing my fist in the air with excitement and I will also make sure I have the last word when I say 'hold or cut bow-strings,' which I will say firmly and sharply with authority. Overall I will try to irritate the actors and the audience, and make them feel sympathetic towards Quince. I also want the audience to realise that although I am very confident and make out that I'm very talented, I am not very good and don't really have the ability to act other parts, this makes it comical. I will intimidate the other actors on stage to emphasise my authority and I will make sure that I have Quince's attention throughout the whole scene, so if Quince turns his back on me or pushes me out of the way, I will get in front of his view and I will push him out of the way too. This way the audience can see our relationship clearer. There are lots of different levels of emotion when Bottom is acting and there is a lot of competition between Quince and him. Bottom is a very comical and melodramatic character to play. ...read more.