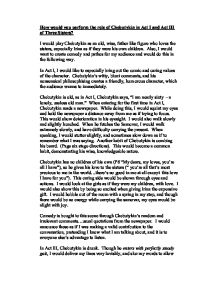 How would you perform the role of Chebutykin in Act I and Act III of Three Sisters?

How would you perform the role of Chebutykin in Act I and Act III of Three Sisters? I would play Chebutykin as an old, wise, father like figure who loves the sisters, especially Irina as if they were his own children. Also, I would want to create comedy and pathos for my audience and would do this in the following way. In Act I, I would like to especially bring out the comic and caring values of the character. Chebutykin's witty, blunt comments, and his nonsensical philosophising creates a friendly, humorous character, which the audience warms to immediately. Chebutykin is old, as in Act I, Chebutykin says, "I am nearly sixty - a lonely, useless old man." ...read more.

This caring side would be shown through eyes and actions. I would look at the girls as if they were my children, with love. I would also show this by being so excited when giving Irina the expensive gift. I would hobble out of the room with a spring in my step, and though there would be no energy while carrying the samovar, my eyes would be alight with joy. Comedy is bought to this scene through Chebutykin's random and irrelevant comments...usual quotations from the newspaper. I would announce these as if I was making a valid contribution to the conversation, pretending I know what I am talking about, and it is to everyone else's advantage to listen. ...read more.

I would create this by standing staring at the pieces, close to tears in despair, before trying to rectify my actions with another nonsensical comment, and turning the attention by talking about Natasha and Protopopov - shocking and embarrassing everybody even more. This comment also shows his observant nature, so when supposedly reading the paper in Act I, my eyes and ears would be everywhere, picking up anything suspicious. My intention to create a caring, wise old man out of Chebutykin would be successful in Acts I and III if I used the above effects. The audience would warm to him and feels sorry for him in Act III even though he is drunk. My aims would be achieved. ...read more.