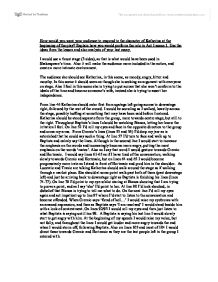 How would you want your audience to respond to the character of Katherina at the beginning of the play? Explain how you would perform the role in Act 1 scene 1.

How would you want your audience to respond to the character of Katherina at the beginning of the play? Explain how you would perform the role in Act 1 scene 1. Use the ideas from the lesson and also analysis of your last essay. I would use a thrust stage (3 sides), as that is what would have been used in Shakespeare's time. Also it will make the audience more included in the action, and create a more intimate environment. The audience she should see Katherina, in this scene, as moody, angry, bitter and mouthy. In this scene it should seem as though she is seeking an argument with everyone on stage. ...read more.

I'd drop my jaw as is astonished that he could say such a thing. At line 57 I'd turn to face and walk up to Baptista and calmly say the lines. Although in the second line I would start to increase the emphasis on the words and increasingly become more angry, putting the most emphasis on the words 'mates'. Also as I say that word I would gesture towards Gremio and Hortensio. I would say lines 61-65 as if I have tired of the conversation, walking slowly towards Gremio and Hortensio, but on lines 64 and 65 I would become progressively more irate as I stand in front of Hortensio and prod him in the shoulder. ...read more.

When Gremio says 'fiend of h**l...' I would raise my eyebrows with an amazed expression, and then as Baptista says 'I am resolved' I would stand beside him with a look of contentment. On lines 92/93 I would roll my eyes and then just listen to what Baptista is saying until line 99. A Baptista is saying his last line I would slowly start to get angry with him. At the beginning of my speech I would raise my voice, but not fully, and throughout the lines I would get louder and more angry towards the end when I would storm off, following Baptista. Also on lines 103 and most of 104 I would direct these towards Gremio and Hortensio as they are the last people left in the group I entered with. ...read more.