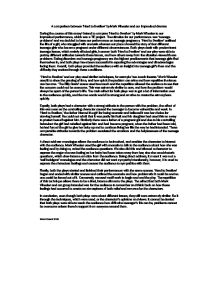 I intend to compare 'Hard to Swallow' by Mark Wheeler to our improvised performance, which was a TIE project. The stimulus for our performance was 'teenage problems' and we decided to base our performance on teenage pregnancy.

A comparison between 'Hard to Swallow' by Mark Wheeler and our Improvised dramas During the course of this essay I intend to compare 'Hard to Swallow' by Mark Wheeler to our improvised performance, which was a TIE project. The stimulus for our performance was 'teenage problems' and we decided to base our performance on teenage pregnancy. 'Hard to Swallow' outlined the life of a girl, who struggled with anorexia whereas our piece showed the story of four different teenage girls who became pregnant under different circumstances. Both plays dealt with predominant teenage issues, which mainly affected girls, however both 'Hard to Swallow' and our play were able to portray different attitudes towards these issues, and how others away from the situation viewed these problems. ...read more.

Equally, both plays had a character with a strong attitude to the person with the problem, the effect of this was seen as the controlling character caused the teenager to become vulnerable and weak. In 'Hard to Swallow,' the father blamed the girl for being anorexic and believed it was her choice for starving herself. He could not admit that it was partly his fault and his daughter had used this as a way to protect herself against him. Similarly there was a father of a pregnant girl and due to his controlling behaviour the girl had rebelled against him and had become pregnant, when the father had been told, he had forced the girl to give her baby up and to continue living her life the way he had intended. ...read more.

'Hard to Swallow' began and ended with similar scenes and outlined the anorexia and how problematic it could be and no one could be forced out of it. Conversely, we used motif work to begin and end the play. The repetition of this technique allows there to be a final, intense climax to the plays. The effect that both Mark Wheeler and our group intended was for the audience to remember and think back on how these feelings had occurred to create an atmosphere of both relief and remorse for the characters. In conclusion, even though both plays were about different issues, they still were extremely similar. Be it through the techniques, which were used, or the character's opinions and views. It cannot be denied that both plays were able to teach the audience how difficult a teenager's life can be, problems cannot be overcome unless there is support from everyone around them. Word Count: 633 ...read more.