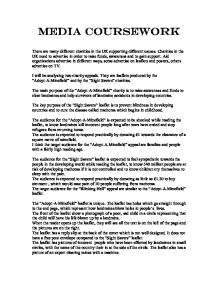 I will be analysing two charity appeals. They are leaflets produced by the Adopt-A-Minefield and by the Sight Savers charities.

Media Coursework There are many different charities in the UK supporting different causes. Charities in the UK need to advertise in order to raise funds, awareness and to gain support. Aid organizations advertise in different ways, some advertise on leaflets and posters, others advertise on TV. I will be analysing two charity appeals. They are leaflets produced by the "Adopt-A-Minefield" and by the "Sight Savers" charities. The main purpose of the "Adopt-A-Minefield" charity is to raise awareness and funds to clear landmines and help survivors of landmine accidents in developing countries. The key purpose of the "Sight Savers" leaflet is to prevent blindness in developing countries and to cure the disease called trachoma which begins in childhood. The audience for the "Adopt-A-Minefield" is expected to be shocked while reading the leaflet, to know landmines kill innocent people long after wars have ended and stop refugees from returning home. The audience is expected to respond practically by donating �1 towards the clearance of a square metre of minefield. I think the target audience for the "Adopt-A-Minefield" appeal are families and people with a fairly high reading age. The audience for the "Sight Savers" leaflet is expected to feel sympathetic towards the people in the developing world while reading the leaflet, to know 540 million people are at risk of developing trachoma if it is not controlled and to know children cry themselves to sleep with the pain. ...read more.

The heading on the cover of the leaflet "Blinking h**l" is in white, bold font. The colour of the leaflet is blue and contrasts with the white font. The pictures are set out next to the text because when the reader is reading the text, they know exactly what is happening and have a good idea of what they are trying to say. The reply slip is presented in a excellent way. It is located at the end of the leaflet with an attached free post envelope. The leaflet has a modified picture of the ointment "Tetracycline" which will cure the disease called trachoma. The writers have shown the ointment bigger than it really is to trick the audience. The leaflet has a well designed logo. It has a globe representing an eye which is surrounded by the name of the charity "Sight Savers" and its registered charity number. The features I have analysed appeal to the target audience as the text and pictures are for people with a fairly high reading and people with families. In the "Adopt-A-Minefield" leaflet, the writer uses many language devices such as personal pronouns, pattern of three, lists and repetition. In the first few paragraphs the writer uses a lot of personal pronouns such as "you can make a difference" which makes the audience feel guilty, that you can do something to help out other people but are not. ...read more.

They are trying to convince the audience to place a donation. The writer uses a fact "we have curing eye diseases in developing countries since 1950". The writer wants you to know that they are not a scam and that they have been curing eyes from the last 50 years. The tone is appealing as they keep repeating "we can not cure trachoma without your donations". I have found many similarities in both the leaflets. They both used some interesting facts and many language devices. The "Sight Savers" and "Adopt-A-Minefield" charities both attached an reply slip at the back of the cover. They both used many appealing, shocking pictures and their target audience were similar. There were not that many differences between the two leaflets. The reply slip used by the "Sight Savers" had a free post stamp on it whereas the "Adopt-A-Minefield" did not. Their causes were different and the "Adopt-A-Minefield" layout was very unique as it had holes going through the leaflet to the end page. The leaflet I found most effective for the intended audience was the "Blinking h**l" leaflet since the intended audience were people with a fairly high reading age and in the "Adopt-A-Minefield" leaflet there was not enough information about the cause. They had less writing and more pictures whereas the "Blinking h**l" leaflet had a lot of information about the cause, less pictures and the layout was much better. By Gavinder Joahl ...read more.