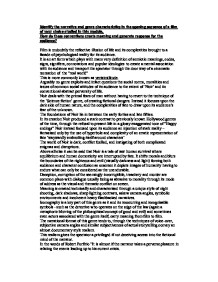 Identify the narrative and genre characteristics in the opening sequence of a film of your choice studied in this module.How do these conventions create meaning and generate response for the audience?

Identify the narrative and genre characteristics in the opening sequence of a film of your choice studied in this module. How do these conventions create meaning and generate response for the audience? Film is undoubtly the reflective illusion of life and its complexities brought to a facade of psychological reality for its audience. It is an art form which plays with mans very definition of semiotic meanings, codes, signs, signifiers, connotations and popular ideologies to create a mental association with its audience and transport the spectator through the door way of a cinematic recreation of the "real world" This is more commonly known as verisimilitude. Arguably no genre exploits and infact questions the social norms, moralities and issues of common social attitudes of its audience to the extent of 'Noir' and its conventional abstract perversity of life. Noir deals with the primal fears of man without having to revert to the technique of the 'Science fiction' genre, of creating fictional dangers. Instead it focuses upon the dark side of human nature, and the complexities of fate to draw upon its audience's fear of the unknown. ...read more.

we too will experience tensions between perspective and reality. This in itself is a dark foretelling of what is to come as the layers of the film unravel before our eyes. It is through this early visualisation of enigma and moral conflict that Singer demonstrates not only a superb usage of Noir genre conventions but a skilled stretching of there boundaries. A further usage of conventions of this genre can be witnessed in the naturalistic settings of water and light. Singer again expands these conventions to create conflict between these 'pure' settings and the man made 'evil' to come, as is suggested by the connotations of an imposing credit sequence and sinister soundtrack over this scene of uneasy tranquillity. Written codes are then simplistically used in an "old school" filmatic style to establish the time and location of 'San Pedro, last night' this technique by Singer places the audience into a false security with the 'truth' of the narration throughout the film - and again within genre conventions ultimately misleads them, but in a more sophisticated style then previously seen in other films such as Hitchcock's 'Stage fright' (1950). ...read more.

Again with this we are being thrown into the perspective of 'The Detective' and Singer is enforcing as much upon his audience, "role" as the actors within the film. One of the many ironies within the film is Verbal's initial interrogation with his composition against the backdrop of a statue of justice. This pessimistic outlook for moral justice is again traditional Noir. This play with the audience's perspective is also shown through the featuring of Kujon in low angle shots - giving the audience a false impression of his characters overall power dynamic in the plot, and conflicting themes of Good and Evil.This convention is also used in 'Mildred Pierce'but not arguably as effectively so as Singers encorporation of it into his audience's confusion. In conclusion, from the opening sequence alone it is not only clear Singer utilises nearly all of the aforementioned recognisable characteristics, narrational techniques, genres and recognisable signatures of Film Noir,but that he twists these complexly in order to create layering of meaning and a deconstructionalist plot line for his audience. We are given implausible and inconsistent clues and narration throughout the piece, alongside edgy performances which create a near religious intensity throughout film. ...read more.