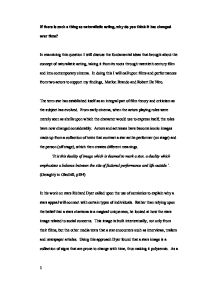 If there is such a thing as naturalistic acting, why do you think it has changed over time?

If there is such a thing as naturalistic acting, why do you think it has changed over time? In examining this question I will discuss the fundamental ideas that brought about the concept of naturalistic acting, taking it from its roots through twentieth century film and into contemporary cinema. In doing this I will call upon films and performances from two actors to support my findings, Marlon Brando and Robert De Niro. The term star has established itself as an integral part of film theory and criticism as the subject has evolved. From early cinema, when the actors playing roles were merely seen as shells upon which the character would use to express itself, the roles have now changed considerably. Actors and actresses have become iconic images made up from a collection of texts that contrast a star as the performer (on stage) and the person (off stage), which then creates different meanings. 'It is this duality of image which is deemed to mark a star, a duality which emphasises a balance between the site of fictional performance and life outside'. (Geraghty in Gledhill, p184) In his work on stars Richard Dyer called upon the use of semiotics to explain why a stars appeal will connect with certain types of individuals. Rather than relying upon the belief that a stars charisma is a magical uniqueness, he looked at how the stars image related to social concerns. ...read more.

(Geraghty in Gledhill, rfs, p192) With the progression of time further generations of method actors have also emerged onto the scene bringing with them fresh perspective and impetus, in addition to the turmoil and anxiety that seem to be a pre-requisite to fill the role. Of the actors I speak of Robert De Niro is one who, like Brando before him has remained very much the individual, ignoring many of trappings that come with fame and abandoning responsibilities that many stars embrace; "Naremore comments that De Niro, 'since becoming a famous actor, has avoided tacky celebrity interviews'" (Geraghty in Gledhill, p192). Brando, the original rebel had led the way with his non-conformist views and anti-celebrity manner and others such as Dustin Hoffman have kept the tradition alive. As a result the method has become synonymous with the word 'difficult' when referring to a practitioner of the technique, much like the characters many of the actors portray on screen. The emphasis on the individual is one that De Niro carries heavily both on and off screen. Performances such as Max Cady in Cape Fear, Taxi Drivers Travis Bickle, Neil McCauley in Heat or Goodfellas Jimmy Conway, have all involved De Niro segregating himself, often in the name of a self appointed vocation. In his role as Jake LaMotta in Raging Bull we witness a man who gradually severs links with all who mean anything to him, most notably with his brother, Joey. ...read more.

was associated with the youthful naturalness and impulsive rebellion of James Dean or Marlon Brando, cinematic method acting is now a way of marking performance as work and thus claiming cultural value'. (Geraghty in Gledhill, p193). The method has offered stars the chance to pro-long their careers through the pin-up years, taking focus away from the body as a spectacle and onto it as a site for performance. Michael Mann's Heat offered two method actors, De Niro and Al Pacino, with the chance to pit their legendary skills against each other in the same scene for the first time; 'Their roles in Heat distil the elements of other roles they have played throughout their careers, and not just in the sense of iconic weight their screen presence and familiarity brings to every role' (James, p53). One the criminal, one the cop, we see how two highly experienced actors, renowned for roles played in the youth, trade blows as the camera focuses purely on their faces, framing tighter as the scene continues. Though their performances differ, Pacino seems more alert, eyes wide open, leaning forward where as De Niro is more reserved leaning back, the sense that they work well together is obvious. The method has allowed them both to conceive a form of acting that, though it may differ from Brando due to cinematic developments, is still born from the same ideals that Stanislavski and Strasberg had brought to cinema, just that now the cultural value associated with the technique has reached greater heights. ...read more.