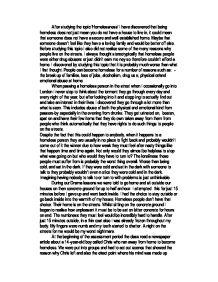 Imagine yourself in a state of 'Homelessness'.

After studying the topic 'Homelessness' I have discovered that being homeless does not just mean you do not have a house to live in, it could mean that someone does not have a secure and well established home. Maybe that someone doesn't feel like they have a loving family and would be better off else. Before studying this topic I also did not realise some of the many reasons why people live on the streets. I always thought stereotypically that homeless people were either drug abusers or just didn't earn money so therefore couldn't afford a home. I discovered by studying this topic that it is probably much worse than what I first thought. People can become homeless for a number of reasons such as: - the break up of families, loss of jobs, alcoholism, drug use, physical or/and emotional abuse at home. When passing a homeless person in the street when I occasionally go into London I never stop to think about the torment they go through every day and every night of the year, but after looking into it and stopping to actually find out and take an interest in their lives I discovered they go through a lot more than what is seen. This includes abuse of both the physical and emotional kind from passers-by especially in the evening from drunks. They get urinated on, beaten, spat on and have their few items that they do own taken away from them from people who think automatically that they have rights to do such things to people on the streets. ...read more.

Chris replied to him " Anything to get away from you." This moment is significant because it shows the exact point where Chris feels Dave has crossed the line and makes his definite decision to leave home. When we acted these scenes about Chris, we didn't really know about the reasons for why people leave but we did learn that youngsters that leave home to live on the streets won't return easily due to their pride. Like Chris, he wouldn't return until Dave was out of his family's life and out of their home. After reading the extract 'And The Stars Were Made Of Gold' our group decided to build a character based on the guard whom a group member played whilst acting a section from 'And The Stars Were Made Of Gold'. In our development work we had to show where someone is forced to leave his or her home. The storyline we decided on was the death of a girl's parents and her aunt who is her next of kin comes down to look after her. A few days after the funeral the girl's aunt gives her two boxes to fill before forcing her to come back to live with her. We decided that the guard who was a strong minded but nasty person would help us when we came to do our development work. He gave us the idea of having someone as evil-minded as himself also forcing someone out of their home would be an affective way of showing a force from the girl's home to her aunt's house. ...read more.

The best part of the 'Homelessness' topic was probably acting out our monologues. I really enjoyed seeing other people's points of view on homeless people. Everyone had different ideas of what homeless people were really like. I thought this was a brilliant way of broadening our thoughts on Homeless people. At first I thought homeless people were just people who couldn't be bothered to get jobs and pay their way, but after studying this topic for a number of weeks I now can see that the reasons why people live like they do are not always so straight forward. I don't believe that they are any less people than anyone else whereas I probably thought this before, which was unfair of me. This assessment has been extremely mind provoking for me and I have learned lots about the homeless and how they live. Also about the things they go through and the hard times they have especially in the winter and at night. The reasons why they are on the streets I am now aware of and understand more about their lives. Obviously I do not know what it is like to live on the streets because I have never ever experienced anything like that that but it gave me an insight into what it might be like. I enjoyed acting out various scenes and monologues during this topic as much as reading the extracts and articles. ...read more.