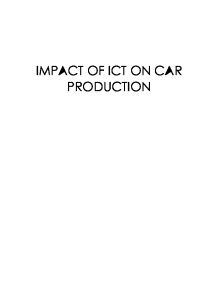 Impact of ICT on Car Production.

IMPACT OF ICT ON CAR PRODUCTION Contents CONTENTS 2 CAR PRODUCTION IN THE PAST 3 CAR PRODUCTION AS IT IS NOW 4 PRODUCTION AND ASSEMBLY 4 EMPLOYEES 6 MANUFACTURERS 6 Car Production In The Past Traditionally, there would be a group of workers who would assemble cars. Skilled manual workers operated lathes and cutting tools, this would need lots of training and experience. The workers needed the ability to adapt to changes in task specifications. However unskilled and partly-skilled workers had to sort out and assemble these pieces by hand. Engineers who designed the cars had to work with paper and drawing equipment, producing one or two dimensional diagrams and plans. However these plans often had to be redrawn from scratch if testing had failed. Engineering designers who worked in teams had to work simultaneously on one paper drawing or make amendments on photocopies. To test new products they built scale models or prototypes. These engineers were then required to breakdown designs into parts, estimate raw materials required and write working instructions for production line workers. ...read more.

Designing And Testing The introduction of computers has also greatly changed the way design and testing of products is carried out. The conventional methods of drawing designs by hand and building prototypes for testing have been replaced by Computer-assisted Design Technologies (CAD). Engineering designers now work at computer screens, where they can draft and visualize the products they are designing. The two and three dimensional designs produced using CAD, can be quickly and easily modified, if required. CADs ability to simulate eventual performance has greatly decreased the time new products spend in the design and testing stage, which would normally have been expected to consume a major part of the overall manufacturing time. Using CAD has required Engineering Designers to have a computer literacy not previously necessary and has largely dispensed with the use of technical and engineering drawing, by hand, that was previously an essential skill. Computer-assisted Manufacturing technologies (CAM), an extension of CAD design which determine the quantities of materials needed and instructions required to produce an item, have further changed the engineer's role. ...read more.

Advantages for employees include the undertaking of hazardous work being transferred to robots and some companies teaching their employees new skills to replace the redundant ones. Manufacturers Many manufacturers argue that computers are an essential element of manufacturing and systems such as FMS are necessary to meet today's market demands for small batch production and to keep up with fierce competition and the pace of technological change. They suggest that computerisation offers the benefits of a consistent quality of products and a considerable speeding up of the manufacturing process, particularly in design and testing, e.g. Boeing, was able to cut the design and testing stage of their 777 aeroplane by 90% using CAD technology. The speeding up of the design and testing process often results in considerable savings to a company as Lockhead Martin report. A disadvantage of computerised manufacturing is the huge capital outlay required to implement systems like FMS. The recouping of this capital is often slow and difficult to measure. Indeed several authors, including Paul Strassmann, writing for Computerworld, suggest that the investment in computerised systems is not economically justified by gains in productivity. 2 ...read more.