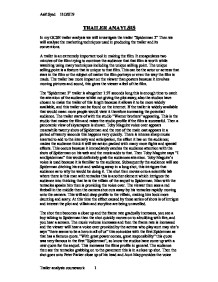 In my GCSE trailer analysis we will investigate the trailer

TRAILER ANAYLSIS In my GCSE trailer analysis we will investigate the trailer "Spiderman 2" Then we will analyse the marketing techniques used in producing the trailer and its conventions. A trailer is an extremely important tool in making the film. It encapsulates two minutes of the film trying to convince the audience that that film is worth while watching using many techniques including the unique selling point. The unique selling point is a feature that is unique to that film. This can be the actor or actress that stars in the film or the subject of matter the film portrays or even the way the film is made. The trailer has more impact on the viewer than posters because it involves moving pictures and sound, this gives the viewer a feel of the film. The "Spiderman 2" trailer is altogether 1:27 seconds long this is enough time to catch the attention of the audience whilst not giving the plot away, also the studios have chosen to make the trailer of this length because it allows it to be more widely available, and this trailer can be found on the internet. If the trailer is widely available that would mean more people would view it therefore increasing the potential audience. The trailer starts of with the studio "Warner brothers" appearing. This is the studio that makes the film and raises the studio profile if the film is successful. ...read more.

This increases the films profile in general. The audience then see the tentacles grabbing on to the pavement this is in a close up shot. Then the shot goes onto Peter Parker close up of his head and Aunt May provides the voice over again "Even though sometimes we have to give up the thing we love most" this explains to the viewer why Peter Parker appears in that shot the way he does, the frame rate is still high. The frame rate dramatically slows down focusing on the man with the tentacles with a close up shot on his face with him smiling; the angle of the camera is focused on the face. This show the type of personality the villain has, as a cruel and nasty person. The camera moves toward the tentacles as he grabs Peter Parkers girlfriend. Then the music changes to a high dramatic increasing sound and the frame rate increases rapidly. Those scenes give a hint of the plotline of the audience. You then see Peter Parker go back to the alley and he picks up his Spiderman suit and runs of into the distance this is done in a long shot. The shot then moves on to three shots shot witch are very shot in which Spiderman it shows Spiderman wearing his costume. This part is very intriguing to the audience as earlier in the trailer they see Spiderman throw away his costume. ...read more.

The target audience for this trailer is children aged twelve. It is intended people that have general interest in superheroes and comic books, also people who have seen the original. This trailer will be ideally put on the internet because it is about one minute long, also this would be perfect for viewing on TV, and it would be on at a time the target audience would be viewing. This would be about six o clock but would be on in between the right TV program. If there was a show on superheroes then in the advertisement time this trailer would be put on, the reason being the target audience would be viewing. The genre of the films is action/adventure and superhero. The last frame is very important as it shows information about the film, when it will be released, also gives the viewer the official website to the film. The text that is used in the last frame is silver and futuristic coinciding with the film's genre. The film's trailer leaves a huge impact on you and you immediately want to watch the film. This is due to the variations of scenes displayed in the trailer and the music used with the scenes. The combination of a storyline of a romance while intense action. It will leave an imprinted impression on you. For the reason that this will then appeal to more people if the storyline is of a more varied genre. ?? ?? ?? ?? Asif Syed 11O/ST9 Trailer analysis coursework 1 ...read more.