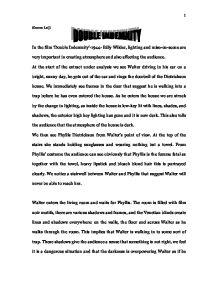 In the film 'Double Indemnity'-1944- Billy Wilder, lighting and mise-en-scene are very important in creating atmosphere and also affecting the audience.

Shama Lalji In the film 'Double Indemnity'-1944- Billy Wilder, lighting and mise-en-scene are very important in creating atmosphere and also affecting the audience. At the start of the extract under analysis we see Walter driving in his car on a bright, sunny day, he gets out of the car and rings the doorbell of the Dietrichson house. We immediately see frames in the door that suggest he is walking into a trap before he has even entered the house. As he enters the house we are struck by the change in lighting, as inside the house is low-key lit with lines, shades, and shadows, the exterior high key lighting has gone and it is now dark. This also tells the audience that the atmosphere of the house is dark. We then see Phyllis Dietrichson from Walter's point of view. At the top of the stairs she stands holding sunglasses and wearing nothing but a towel. From Phyllis' costume the audience can see obviously that Phyllis is the femme fatal as together with the towel, heavy lipstick and bleach blond hair this is portrayed clearly. ...read more.

Phyllis walks down the stairs and the camera focuses on her ankle and legs, particularly the gold anklet and heart. She wears high heel shoes with straps. This shot fetishes her proving even more to the audience that she is marked out as s****l therefore a femme fatal. It also shows her to have some sort of power as high heels usually represent strong women. Her costume puts forward this idea even more. She wears white but this is a trick because white usually symbolises virginal and purity but Phyllis is the opposite of this, she is a brutal woman, who will do what ever she can to get what she wants, even murder. Phyllis enters the living room and heads straight for the mirror. Through this use of mise-en-scene we learn more about the character of Phyllis; her reflection suggests to the audience that she is dichotomous, at the same time we see Walter's reflection behind her this may suggest to the audience that he is also dichotomous behind her. ...read more.

I also feel the audience see her as quite a s****l person by the way she shows her legs and the ankle bracelet when she walks down the stairs. The lighting of the interior of the Dietrichson house shows the audience that this is a very dangerous place that Walter is entering. There are many objects in the living room that create tension and form an atmosphere, which suggest claustrophobia. The room is also filled with lines that are cause by the light stands and Venetian blinds. I think that this gives the audience a suggestion that it is a trap for Walter and thus emphasises the idea of claustrophobia. Lighting and mise-en-scene are very important they affect the audience's response to a certain character or situation and also help create tension and atmosphere. In 'Double Indemnity' film noir visual aspects are used and this helps create a certain atmosphere. These motifs also help us identify character types in this case it was Phyllis, the femme fatale. On the whole atmospheric lighting and mise-en-scene in 'Double Indemnity' affected the audience in such a way that they could sense the powerful tension in the film. ...read more.