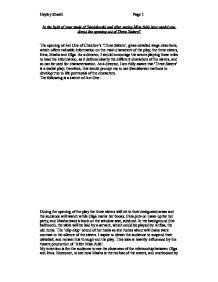 In the light of your study of Stanislavski and after seeing Miss Julie how would you direct the opening act of Three Sisters?

In the light of your study of Stanislavski and after seeing Miss Julie how would you direct the opening act of Three Sisters? The opening of Act One of Chekhov's 'Three Sisters', gives detailed stage directions, which offers valuable information on the main characters of the play; the three sisters, Irina, Masha and Olga. As a director, I would encourage the actors playing these roles to read the information, as it defines clearly the different characters of the sisters, and so can be used for characterisation. As a director, I am fully aware that 'Three Sisters' is a realist play; therefore, this would prompt me to use Stanislavski methods to develop true to life portrayals of the characters. The following is a sketch of Act One: During the opening of the play the three sisters will sit in their designated areas and the audience will watch while Olga marks her books, Irina puts on make-up for her party, and Masha reads a book on the window seat, subdued. In the background (the ballroom), the table will be laid by a servant, which could be played by Anfisa, the old nurse. The 'clip-clop' sound of her heels as she rushes about will make stark contrast to the silence of the sisters. I aspire to obtain the audience to suspend their disbelief, and remain this through-out the play. This idea is heavily influenced by the theatre production of 'After Miss Julie'. ...read more.

Masha is also depressed over her marriage; she believed her husband was intelligent and wise, and now she refuses to accept the reality that he is not this, and she does not love him. The audience will have an insight into the 'true' Masha, an insecure person, who is deeply upset by her sister's relationship and her life in general. This will be shown by Masha observing the play, without allowing the other characters to see (which will create dramatic irony), and reacting to the action behind her, while facing the audience. Masha can use the audience as a friend, and watch them rather than interact with her sisters. Masha's facial expressions are very important in order to portray her character naturalistically. Due to this I would use Stanislavski's' acting method of 'emotion memory', by asking the actress playing Masha to remember how it felt in a part of her life when she had no one to help her, and her life was disappearing before her eyes. I would then ask her to use these feelings with Masha, to create naturalism. Part of Masha's character resents the close relationship between Olga and Irina, and this leads to her feeling more isolated. This will be shown when Masha whistles. The whistle will be one of those 'pretend I'm not here' whistles but at the same time, the whistle will remind the other sisters of Masha's existence. ...read more.

Lighting will be used to mimic natural sunlight streaming through the windows. The audience will be situated around the stage in a semi-circle, and the audience size will be small (around 250), so they will all be very close to the actors. This will make the audience feel more involved, and make the drama more realistic, personal, and believable. All costumes will be to date, and according to the stage directions and only natural make-up will be used. All male soldiers will be wearing military uniforms and civilian clothing. The pace of Act One will develop throughout, to prepare the audience for more tension and a climax in the following acts. In conclusion, I believe the relationship between the three sisters is the focus of Act One, and how they react to other people. I believe the solution to making this play work theatrically is to use Chekhov's idea of comedy and tragedy, to develop the naturalism of the play, as life often has highs and lows. The tragedy of the play creates tension and allows the audience to relate to characters, and then the comedy allows the audience to forget the problems and enjoy the play, as well as making the tragedy more obvious, and at times heartbreaking. To develop Act One I would continue to use Stanislavski methods to increase the naturalism of the play, and improve characterisation. Hayley Sheath Page 1 ...read more.