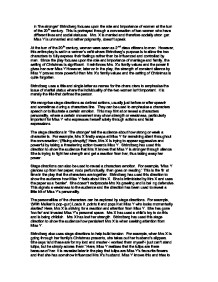 In 'the stronger' Strindberg focuses upon the role and importance of women at the turn of the 20th century.

In 'the stronger' Strindberg focuses upon the role and importance of women at the turn of the 20th century. This is portrayed through a conversation of two women who have different lives and social statuses. Mrs. X is married and therefore socially stronger. Miss Y is unmarried and rather poignantly, doesn't speak. At the turn of the 20th century, women were seen as 2nd class citizens to men. However, this entire play is set in a women's caf� where Strindberg's purpose is to allow the two characters to fully express their feelings rather than be influenced and controlled by men. Since the play focuses upon the role and importance of marriage and family, the setting of Christmas is significant. It reinforces Mrs. X's family values and the power it gives her over Miss Y However, later on in the play, the strength of constant silence by Miss Y proves more powerful than Mrs X's family values and the setting of Christmas is quite forgotten. Strindberg uses a title and single letter as names for the characters to emphasise the issue of marital status where the individuality of the two women isn't important. It is merely the title that defines the person. We recognise stage directions as defined actions, usually just before or after speech and sometimes during a characters line. ...read more.

For example, when Mrs X is going through her family's Christmas presents, she takes out her husband's slippers. She says 'and these are for my lord and master-I worked them myself-I just can't stand tulips, but he simply adores them.' Here, Miss Y realises that the tulips are there because of her. It is revealed later in the play that tulips are Miss Y's favourite flowers and that she has somehow influenced Mrs X's husband. Miss Y knows this and tries to ignore it. She; 'turns a page of her paper, and gives Mrs X an ironical look as she does so, and then resumes her reading.' This stage direction lets the audience know that a turning point in the play is coming up, when the 'secret relationship' between Miss Y and Mrs X's husband is revealed. This is confirmed when Mrs X uses the slippers to 'show off' her husband to Miss Y. Mrs X says that Miss Y has never seen him in slippers and Miss Y '(laughs aloud)'. She is 'poking fun' at Mrs X's ignorance of the situation. Strindberg has used this stage direction to help build tension between Miss Y and Mrs X. There are many points nearing the end of the play where the dramatic tension between Mrs X and Miss Y is increased by Strindberg's use of pauses. ...read more.

An interesting and controversial idea for Miss Y's costume would be suffragette trousers. This would be entirely different to Mrs X's restrictive dress. It would indicate that Mrs X is dressing to the fashion code and is 'restricted' by her marriage whereas Miss Y has total social freedom and represents individual women whom wanted to see a change to the male-dominated world. Throughout the play, there are times when both characters are strong and weak. It is only at the end of the play where I feel that Mrs X's true strength is shown. She briefly concludes the argument and doesn't appear to have any hard feelings towards Miss Y. She even thanks her for the way she has influenced her family life. Mrs X represented the traditional women of Strindberg's time where her life revolved around her husband and family. This is completely the opposite for Miss Y who represented women wanting a change to the male-dominated world. She doesn't react to Mrs X's patronising speeches about family or children and remains calm. She is more interested in her paper than what Mrs X has to say. Above all, I conclude that Miss Y is 'the stronger'. This is because of her ability to not rise to Mrs X's 'bait'. She is strong in her silence and never retaliates. ...read more.