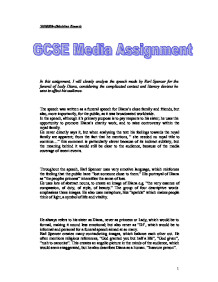 In this assignment, I will closely analyse the speech made by Earl Spencer for the funeral of Lady Diana, considering the complicated context and literary devises he uses to affect his audience.

5dfdfdfdftrcfMadeline Kennedy In this assignment, I will closely analyse the speech made by Earl Spencer for the funeral of Lady Diana, considering the complicated context and literary devises he uses to affect his audience. The speech was written as a funeral speech for Diana's close family and friends, but also, more importantly, for the public, as it was broadcasted worldwide. In the speech, although it's primary purpose is to pay respects to his sister; he uses the opportunity to promote Diana's charity work, and to raise controversy within the royal family. He never directly says it, but when analysing the text his feelings towards the royal family are apparent; from the fact that he mentions, " she needed no royal title to continue..." ...read more.

"the very essence of compassion, of duty, of style, of beauty." The group of four descriptive words emphasises these images. He also uses metaphors, like "sparkle" which makes people think of light, a symbol of life and vitality. He always refers to his sister as Diana, never as princess or Lady, which would be to formal, making it sound less emotional; but also never as "Di", which would be to informal and personal for a funeral speech aimed at so many. Earl Spencer creates many contradicting images, which balance each other out. He often mentions religious references, "God granted you but half a life", "God given", "rush to canonise". This creates an angelic picture in the minds of the audience, which would seem exaggerated, but he also describes Diana as a human. ...read more.

These changes in pronouns not only change the way the audience feel, but add variety to the speech, which could otherwise be boring. In conclusion, I think that Earl Spencer's speech is well written in terms of its effectiveness. It is raw and emotive, partly because it is very subjective. Bearing in mind that this was written so soon after the Princesses sudden death, this is not surprising. It provoked strong feelings and may have seemed appropriate to the audience at the time. On reading this speech nearly five years after it was given, it seems a strange speech to direct at such a wide and public audience. I am not sure how much it says about Diana as a real person, or how accurate it is as a record of events. It may say as much, if not more, about Earl Spencer than Princess Diana. 1 ...read more.