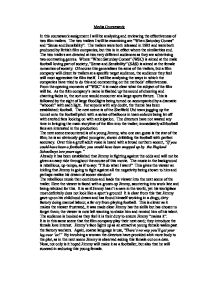 In this coursework assignment I will be analysing and reviewing the effectiveness of two film trailers. The two trailers I will be examining are

Media Coursework In this coursework assignment I will be analysing and reviewing the effectiveness of two film trailers. The two trailers I will be examining are "When Saturday Comes" and "Sense and Sensibility". The trailers were both released in 1995 and were both produced by British film companies, but this is in effect where the similarities end. The two trailers are directed at two very different audiences as they are advertising two contrasting genres. Where "When Saturday Comes" (WSC) is aimed at the male football loving part of society, "Sense and Sensibility" (S&S) is aimed at the female romantics of society. Of course this generalises the aims of the trailers, but a film company will direct its trailers at a specific target audience, the audience they feel will most appreciate the film itself. I will be analysing the ways in which the companies have tried to do this and commenting on the methods' effectiveness. From the opening moments of "WSC" it is made clear what the subject of the film will be. As the film company's name is flashed up the sound of cheering and chanting fades in, the sort one would encounter at a large sports fixture. This is followed by the sight of large floodlights being turned on accompanied by a dramatic "whoosh" with each light. For anyone with any doubt, the theme has been established: football. The next scene is of the Sheffield Utd team jogging up the tunnel onto the football pitch with a series of balloons in team colours being let off with excited fans looking on with anticipation. ...read more.

His old coach, "Potential's no good if you haven't got the courage to use it." By doing this the directors have drawn the viewer in. The viewer wants to say their own words of encouragement to Jimmy; they really want to see him succeed. By putting this impediment in the way, the viewer has found a reason to watch the film, for it seems there is some drama along the way. This is a clever ploy by the directors. Then we are shown images of Jimmy training hard again, it looks as though he really did pay attention to everything people told him. Finally in the closing scenes we see the fairytale ending the audience has been expecting since the opening shot; Jimmy scoring the winning goal for Sheffield Utd. He has made it! To reinforce the sport aspect and conclude the trailer "When Saturday Comes" is flashed up on the screen in red and white team colours. The directors in this trailer have decided to give the main storyline of this film away. By doing this they have taken a gamble. They are hoping that the majority of people will want to watch the film for all of the sub-plots, and for the British comedy of the film. They will not appeal to those who do not like to know the plot in advance, but those who prefer a simple British comedy. This film is very similar to other gritty northern films which have been very successful. ...read more.

This is a stark contrast To "WSC" because the directors of that trailer had to give away almost the entire plot to try and entice people to see the film. "S&S" also has the advantage of having an instant appeal to out Atlantic neighbours in America. As I mentioned before, the Americans like to keep an image of the gentry of England, those that talk with the plum-in-the-mouth accent. America is the premiership of all countries to conquer, and if this film is a success over there then it is a guaranteed box-office smash. Personally I don't find the trailer for "WSC" successful at all, as I don't like to know much of the plot before I watch a film. Aside from this the subject seems boring, even though I am an avid football fan myself. The only part of the trailer that appealed to me was the coarse Northern language. I enjoy watching gritty Brit-comedies myself, so I could be tempted to give the film a try for its comedy element. I find the trailer for "S&S" intrigues me much more, but I am most definitely one for the classics- having a large collection of them in my bookcase. There is not much of the plot given away and I appreciate Hugh Grant's acting. The difficulty in choosing between the effectiveness of these two trailers is that I am instantly biased by the film genres. The topic of "WSC" (talented working-class man achieves premiership success) just does not appeal to me whereas "S&S" (classic romantic comedy with Hugh Grant) interests me greatly. ...read more.