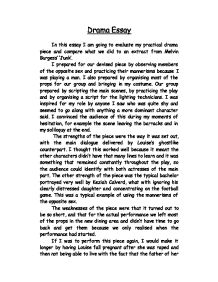 In this essay I am going to evaluate my practical drama piece and compare what we did to an extract from Melvin Burgess' 'Junk'.

Drama Essay In this essay I am going to evaluate my practical drama piece and compare what we did to an extract from Melvin Burgess' 'Junk'. I prepared for our devised piece by observing members of the opposite s*x and practicing their mannerisms because I was playing a man. I also prepared by organising most of the props for our group and bringing in my costume. Our group prepared by scripting the main scenes, by practicing the play and by organising a script for the lighting technicians. I was inspired for my role by anyone I saw who was quite shy and seemed to go along with anything a more dominant character said. ...read more.

The other strength of the piece was the typical bachelor portrayed very well by Keziah Calverd, what with ignoring his clearly distressed daughter and concentrating on the football game. This was a typical example of using the mannerisms of the opposite s*x. The weaknesses of the piece were that it turned out to be so short, and that for the actual performance we left most of the props in the new dining area and didn't have time to go back and get them because we only realised when the performance had started. If I was to perform this piece again, I would make it longer by having Louise fall pregnant after she was raped and then not being able to live with ...read more.