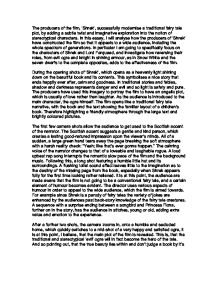 In this essay, I will analyse how the producers of 'Shrek' have constructed the film so that it appeals to a wide audience, including the whole spectrum of generations.

The producers of the film, 'Shrek', successfully modernise a traditional fairy tale plot, by adding a subtle twist and imaginative exploration into the notion of stereotypical characters. In this essay, I will analyse how the producers of 'Shrek' have constructed the film so that it appeals to a wide audience, including the whole spectrum of generations. In particular I am going to specifically focus on the characters of Shrek and Lord Farquaad, and investigate how reversing their roles, from evil ogre and knight in shining armour, as in Snow White and the seven dwarfs to the complete opposites, adds to the effectiveness of the film. During the opening shots of 'Shrek', which opens as a heavenly light shining down on the beautiful book and its contents. This symbolises a nice story that ends happily ever after, calm and goodness. In traditional stories and fables, shadow and darkness represents danger and evil and so light is safety and pure. The producers have used this imagery to portray the film to have an angelic plot, which is usually of love rather than laughter. As the audience is introduced to the main character, the ogre himself. The film opens like a traditional fairy tale narrative, with the book and the text showing the familiar layout of a children's book. Therefore highlighting a friendly atmosphere through the large text and brightly coloured pictures. The first few camera shots allow the audience to get used to the Scottish accent of the narrator. The Scottish accent suggests a gentle and kind person, which creates a lasting good-natured impression upon the viewer's minds. All of a sudden, a large green hand tears away the page breaking the soft atmosphere with a harsh reality check: "Yeah; like that's ever gonna happen." The calming voice of the narrator changes to that of a loveable and laughable rogue. A loud upbeat rap song interrupts the romantic slow pace of the film and the background music. ...read more.

Shrek is not too keen on the idea. However, the persistent animal assists the lead character in his quest to save his home. Further on from this, follows love, for the hideous ogre, when he rescues the Princess Fiona. A few crossed wires and viewers are set to see another beauty and the beast story line, but with a subtle difference. Shrek copes with this stage in the film, by hiding behind his tough exterior, just as many people in reality find it hard to cope with their feelings. He bottles up his emotions and the on-screen characters create a great build for dramatic irony. Behind this scene, is the basis and moral of the story, later to be revealed in the final scene: That the true beauty lies within, and not to judge a book by it's cover. Lord Farquaad appears on-screen for the first time, looking very superior to the rest of the characters, by the use of fine settings, a low shot in order to create a feeling of height and power. However as the Lord 'struts' up to a rather large table, it is exposed that he is in fact, a midget. This then, obviously makes the audience laugh immediately. A few shots onward and we see the first insight to Lord Farquaad's evil side. As previously mentioned, the Lord does not portray the traditional 'Knight in Shining Armour' role, he has swapped this with Shrek's character to become the evil character. The Lord, has taken a loveable fairy tale creature, namely the gingerbread man, and is threatening him by use of physical violence. He laughs and taunts him whilst observing his torture. Just after the gingerbread man's legs have been broken off, the Lord says "Run, run, as fast as you can..." and plays with the helpless character's legs. Then, he tries to pull off the buttons to which the gingerbread man screams "no...not my gumdrop buttons!" ...read more.

By making the film with this subtle twist, the makers allow the film to portray strong morals and ideas within comedy. Another successful outcome of the production is that the film is accessibly to all ages, young or old. However, if Shrek did not have all of the correct lighting, sound, settings and other presentational devices, included within it, I believe that the piece would not be as successful. Consequently, after analysing the characters of Lord Farquaad and Shrek, I have come to the conclusion that although Shrek seems on face value to be a traditional ogre, he is in fact a modernised all around nice guy, he has the personality of every girls dream man. And luckily for those traditional viewers, he does find love and lives happily ever after with Princess Fiona who takes loves true form as an ogre. From the character of Shrek, the audience accept not to take things on face value, not to judge a book by it's cover, and reinforces the fact that the true beauty lies within. Although Lord Farquaad looks like the traditional Prince Charming, his actions suggest that he is evil. For example, he has sent people out to rescue a beautiful princess, and yet, when she takes her true form she rejects her because of her looks and makes false claims to be King. However luckily for the princess, true love prevails. Through using the extremely effective presentational devices, the viewers respect Shrek and look up to him because of his attitude. Shrek is able to portray his feelings to the audience, without ruining the storyline, or the effectiveness of the film. Overall, I feel that in my opinion 'Shrek', is entirely a hilarious piece of motion picture, there to be enjoyed by all generations, the devices used help create the correct balance of atmosphere and make the piece as successful as it has now become. Also the choice of casting has been well appreciated. However, if such successful actors hadn't been used, would the film still be as successful? ...read more.