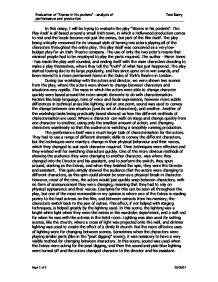 In this essay, I will be trying to evaluate the play &quot;Stones in his pockets&quot;. The Play itself is all based around a small Irish town, in which a Hollywood production comes to rest and the locals become not just the extras, but part of the film itself.

In this essay, I will be trying to evaluate the play "Stones in his pockets". The Play itself is all based around a small Irish town, in which a Hollywood production comes to rest and the locals become not just the extras, but part of the film itself. The play being critically renowned for its unusual style of having two actors playing all of the characters throughout the entire play. The play itself was conceived as a very low-budget play for an Irish Theatre company. The use of only the two actor's means that minimal people had to be employed to play the parts required. The author - Marie Jones - has made the play well rounded, and ending itself with the main characters deciding to make a play themselves, where they tell the "truth" of what has just happened. The play started touring due to its large popularity, and has since gone on to win awards, and been moved to a more permanent home in the Duke of York's theatre in London. During our workshop with the actors and director, we were shown two scenes from the play, where the actors were shown to change between characters and situations very rapidly. ...read more.

This affect, if not helped with staging techniques, is helped greatly by the lighting used. In this scene, the lighting was a bright white light when they were the extras in the wardrobe department, and a soft red for when he was with the actress in the hotel room. Lighting was also used for setting scenes, like the church, where a cross of light was projected onto the wall, and dimmer lighting was used to create the effect of a dimly lit church. But the more effective uses of lighting were for changing between scenes. Sometimes when the characters were playing similar parts (like in the "peat digging" scene), it was nessicery to have a very visible method for changing between characters. In this scene, sound was used when the Extras were acting for the peat digging, and then the sound and pale blue lighting were turned off and the actors changed character to the director and his assistant. The costume and props used were very effective, if minimal. The two actors wore the same clothes (with the exception of the pub scene where they wore separate jackets) throughout, but the characters wore the clothes in a different way. ...read more.

Another scene like that would be the funeral scene, where they are sitting talking about Shaun, and then one has to move away due to the flowers. I felt that that scene could have been improved with perhaps a better dialogue, and that the actors were not to blame for the scene being weak as it was. But my favourite scene, which was acted very well, was the Peat digging scene, which is after Shaun has just died. I feel that it worked so well because the character reactions seemed emotional, yet not overdone and that they seemed natural in this scene. I feel that this production was successful in the way it used the characters, the way it utilised staging and lighting, and was overall a success for the way it was produced. The play needed to change little and the way it was performed was enjoyable, yet you could still find a way to realise the real emotions of the characters. At times, it may have seemed to drag, but the acting more than made up for this. Evaluation of "Stones in his pockets" - analysis of performance and production Tom Barry Page 1 of 2 02/05/07 ...read more.