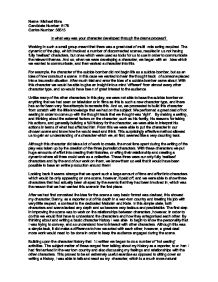 In what way was your character developed through the drama process?

Name: Michael Sims Candidate Number: 8178 Centre Number: 56515 In what way was your character developed through the drama process? Working in such a small group meant that there was a great deal of multi-role acting required. The dynamic of the play, which involved a number of disconnected scenes, resulted in us not having fully 'realised' characters, but ones which were used as tools for us to use in order to communicate the relevant themes. And so, when we were developing a character, we began with an idea which we wanted to communicate, and then worked a character into this. For example, the character of the suicide bomber did not begin life as a suicide bomber, but as an idea of how construct a scene. In this case we wanted to hear the thought track of someone placed into a traumatic situation. After much trial and error the idea of a suicide bomber came about. ...read more.

These three were our only fully 'realised' characters and by the end of our work on them, we knew them so well that it would have been possible to base an entire production around them! Looking back it seems strange that we spent such a large amount of time and effort into characters which would be only appearing on one scene, however, it paid off, and we were able to show three characters that had actually been shaped by the events that they had been involved in, which was the reason that we had wanted this scene in the first place. After we had first conceived the idea for the scene a very basic format was devised, this showed my character, Danny, as a reporter out of his depth in a war-torn country and treating his job with very little respect, a contrast to the dedicated Malcolm and Kate. In this simple state, both characters and scene lacked any depth and so became very tedious and predictable. ...read more.

When it came to the point that I felt that I had learnt all that I could about my character by using hot-seating methods, I decided that it was time to reintroduce him into the scene and gauge how the increased understanding had aided the performance. We discovered that this background work had helped in a number of ways. Firstly, we were able to interact with each other far more easily that we had before, this is simply because we knew how to react as our character and so could quickly respond and know that it was not out of place. Also, during the more intense sessions, we had begun giving the characters mannerisms and quirks which fitted their personality. With these on board I (along with the other cast members) was able to make the character more interesting both to watch and play. The increased understanding of the characters no only allowed us to 'understand' them better in our heads, it also gave the scenes more meaning as more depth was added to their characteristics and mannerisms. ...read more.