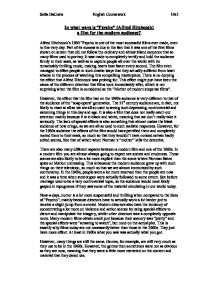 In what ways is "Psycho" (Alfred Hitchcock) a film for the modern audience? Alfred Hitchcock's 1960 "Psycho is one of the most successful films ever made, even to this very day. Part of its success is due to the fact that it was one of the first films shown on screen that did not follow the ordinary and almost bland sequence that so many films used to portray. It was made to completely terrify and hold the audience firmly in their seats, as well as to capture people all over the world with its remarkably thrilling music, making hearts beat faster every second. The film even managed to effect people in such drastic ways that they actually suffered from heart attacks in the process of watching this compelling masterpiece. There is no denying the effect that Alfred Hitchcock was probing for. This effect might just have been the cause of the different direction that films took immediately after, which is not surprising when the film is considered as the "Mother of modern suspense films". However, the effect that the film had on the 1960s audience is very different to that of the audience of the "soap opera" generation. The 21st century audience are, in fact, not likely to react at all as we are all so used to seeing such depressing, controversial and sickening things in this day and age. It is also a film that does not really catch our attention mainly because it is in black and white, meaning that we don't really take it seriously. The lack of special effects is also something that almost makes the blas� audience of now cringe, as we are all so used to such realistic responses. ...read more.

However, as important as lighting was to "Psycho" it is not something that modern directors concentrate an awful lot on. This is mainly due to the fact that modern films are very rarely black and white, so the use of lighting would not have a major impact. However, other modern films, like Darren Aronofsky's critically acclaimed "Pi", still use the black and white technique, which makes you see things in a totally different perspective; a contradictory perspective. The usage of camera has also gone that one step further. Cameras are now used to represent a characters mood and sometimes even reactions. A perfect example of this is, of course, the "Blair Witch Project", where they used the camera as a "point of view". The use of right angled shots and cameras actually attached to the person that is being filmed is successful on providing a very effective "swing effect" and, again, Aronofsky's film "Requiem for a Dream" represents this very well. Music is something that has changed incredibly since the 1960s. Of course, the development of music through out the years can be blamed for this, but many scores used in films have actually been created using computers. This type of effect enables a director to spend less time and money on actually trying to find an orchestra. By using synthesisers, producers are able to manipulate and distort all sorts of music to give the maximum effect. However, music is still very much used to mislead, taunt and even manipulate an audience, just as it did in the time of "Psycho". Many directors also have the habit of making films as over complicated as is possible which makes it all very exhausting and tiresome to see. ...read more.

She did all she could do for her confused character and that "all" has been proved to be more than good enough. The performance she gave when she was getting attacked in the shower and after the attack is one that has not been forgotten, but actually remembered as one of the scariest scenes of all time. The performance of Anthony Perkins is, of course, no different. He, too, managed to portray such a calm but emotionally disturbed character that has left his marks in history. Though his performance was not as great as of that of Janet Leigh's, he was very smartly picked by Hitchcock. He played a slightly dopey boy, who had everyone fooled by his shyness, that you would never have expected him to be the so called "Psycho". He even managed to completely switch between personalities in such an incredible way that he actually left the audience confused. At times he was shy, but other times he looked intimidating and unapproachable. The fact that he had to play a psychopath could not have really been an easy thing to live with, but he gave a first class performance. In my opinion, both of these actors took a major risk in actually taking part in such a film (in the 1960s, of course), because this film could have taken their careers in one of two ways: downhill or up. However, they were such exceptional performers that it was practically impossible to not find the film so fascinating to watch, even if the genre isn't your cup of tea. Both Janet Leigh and Anthony Perkins gave unforgettable performances, both worthy of Oscars and all credit to them for taking part in one of the greatest masterpieces in the history of film. Sofia DaCosta English Coursework 10x1 ...read more.