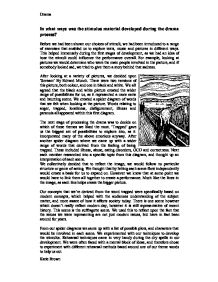 In what ways was the stimulus material developed during the drama process?

In what ways was the stimulus material developed during the drama process? Before we had been shown our choices of stimuli, we had been introduced to a range of exercises that enabled us to explore texts, music and pictures in different ways. This helped immensely during the first stages of development, as we had an idea of how the stimuli could influence the performance overall. For example, looking at pictures we would determine who were the main people involved in the picture, and if somebody looked sad, we tried to give them a story behind that sadness. After looking at a variety of pictures, we decided upon 'Scream' By Edvard Munch. There were two versions of this picture, both colour, and one in black and white. We all agreed that the black and white picture created the wider range of possibilities for us, as it represented a more eerie and haunting scene. We created a spider diagram of words that we felt when looking at the picture. Words relating to anger, trapped, loneliness, disfigurement, illness and paranoia all appeared within this first diagram. ...read more.

There is one scene however which doesn't really reflect modern day, however it is still representative of recent history. This scene is the suffragette scene. We used this to reflect upon the fact that the issues we were representing are not just modern issues, but have in fact been around for years. From our spider diagrams we came up with a list of possible plots, and characters that would be involved in each scene. We experimented with our techniques to develop the stimulus. Rehearsal techniques came in very handy during the dry spells in our development. We were often faced with a mental block of ideas, and therefore chose to experiment with different rehearsal methods based around one of our theme words to help us out. For example, we knew we wanted a scene on abuse, yet we did not know how we wanted to show this. Whether realism or surrealism would be more appropriate and effective. Therefore, we used a technique in which we chose a subject of abuse, and whether we were the abused or the abuser. ...read more.

and this helped create the tension and effect of being alone. We felt this was an important link to our stimulus as the image is relating to loneliness and madness. We used status work to try and create the levels of status that we should portray in each scene. The image represents a delusion of a person who is obviously distressed in some way or another. Therefore during the construction of the scenes, we made every character determine what status they were in comparison to the other characters on the stage at the same time. Although our stimulus provided us with many ideas, we also wanted to incorporate this image with one of the previous stimuli that we had looked at. It was a piece of music which we felt was a representation of poverty as it sounded so sad and depressing. We felt that the image and the music intertwined and linked well with each other, as poverty is present in the music and poverty = loneliness, and loneliness is obviously present in the image. ?? ?? ?? ?? Drama Katie Brown ...read more.