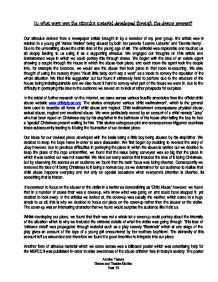 In what ways was the stimulus material developed through the drama process?

In what ways was the stimulus material developed through the drama process? Our stimulus derived from a newspaper article brought in by a member of my peer group, the article was in relation to a young girl 'Ainlee Walker' being abused by both her parents 'Leanne Labonte' and 'Dennis Henry'. Due to the unremitting abuse the child died at the young age of six. The editorial was deplorable and touched us all deeply leading to us using it as a supporting stimulus. We engaged out thoughts on this article and brainstormed ways in which we could portray this through drama. We began with the idea of an estate agent showing a couple through the house in which the abuse took place, and each room the agent took the couple into, for example the bedroom, we would see the abuse that took place in that room re-occurring. We also thought of using the nursery rhyme "Hush little baby don't say a word" as a mode to convey the repulsion of the whole situation. ...read more.

Consequently we removed the idea of it being Christmas to it being a normal day, as we determined for our audience to realise that child abuse happens everyday and not only on special occasions when everyone's attention is diverted, its something that is hidden. It is common to focus on the abuser or the victim in a matter as demoralizing as 'Child Abuse' however, we found that in a number of cases their was a cover-up, who knew what was going on and could have stopped it, yet decided to look away. In the articles we looked at, the cover-up was usually the mother, which came to a huge shock to us all, this is why we decided to focus our piece on the cover-up rather then the abuser or the victim. The cover-up was an interesting character that we found would surprise the audience like it did us. Whilst developing our piece, we found that their was not a whole lot a cover-up could portray about the intensity of the situation which is why we included the extreme details of what the victim was going through. ...read more.

s****l abuse included touching, fondling and penetration. In-order to portray this in a mature manner, we tried out many dramatic methods, for example we began conveying it through physical theatre, which we were influenced by a theatre performance called the "Peepshow by Frantic Assembly". Due to our time constraint the devising of the physicality element was to hard to portray precisely leading to us using abstract drama. We did this successfully as when looking at it as an audience it aroused intense emotion and not humour. Another form of research was the music we used. We devised an abstract dance piece where we tried to portray the stepfather's good side being trapped by his dark side. We used Linken Parks 'Crawling' to assist us in our sinister dance but towards the end of developing our piece we found that the dance did not really convey what we intended therefore we removed it as it only assisted in confusing the audience and not helping in enhancing the main theme. Azmina Thanda Drama and Theatre Studies Year 13 ...read more.