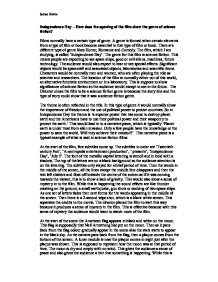 Independence Day - How does the opening of the film show the genre of science fiction?

Independence Day - How does the opening of the film show the genre of science fiction? Films normally have a certain type of genre. A genre is formed when certain elements from a type of film or book become essential to that type of film or book. There are different type of genre likes Horror, Romance and Comedy. The film, which I am studying, is called 'Independence Day'. The genre for this film is science fiction. This means people are expecting to see space ships, good or evil aliens, machines, future technology. The audience would also expect to hear or see special effects. Significant objects would be spacecraft and associated objects, laboratories and scientific items. Characters would be normally men and women, who are often playing the role as scientist and researchers. The location of the film is normally either out of this world, an alternative futuristic environment or in a laboratory. This is suppose to show significance of science fiction so the audience would except to see in the future. The Director chose the film to be a science fiction genre is because the story line and the type of story could show that it was a science fiction genre. ...read more.

The plaque consists of a picture of the earth by two sides to show the whole of the earth in a flat picture and then quote which is 'Here men from the planet earth first set foot upon the moon July 1969 AD. At the bottom of the plaque the names of the crew who went Apollo 11 to the moon and their signatures. The plaque was commemorating Americans landing on the moon in 1969. This also to shows the achievements of the human race but particularly the Americans. After that scene, foot prints which was made by Neil Armstrong starts to vibrates which represents the first time the sand is moving since 1969. This indicates that trouble is about to happen and also a rumbling noise starts. The scene changes again in to a long shot view where a shadow starts to cover the ground in the distance, which comes towards to where the camera is. Then the camera turns around and pans toward the earth, then the shadow comes over head and leads away from the camera. This is suppose to represent that something big is coming towards the earth Which then puts a bit of mystery in to the beginning of the film. ...read more.

He puts the phone speaking bit to the main speaker which gives us the sound of the spaceship earlier in the film. Then the scene where the section commander is in bed comes up again and he hits his head on the bottom of the top bed in the bunk bed. This also shows some more humorous moments in the film. From watching the beginning of 'Independence Day', for the conclusion of the question, which is 'How does the opening of the film show the genre of science fiction?' I conclude that the film shows a lot of science fiction genre though out the beginning. The film starts with the subtitles which the style of the way in which they have done them has set the section at first. Then the film continues by making it patriotic with a sense of fear and mystery. Which is put into perspective when the alien spacecraft appears coming toward earth. In the lab in Mexico scene starts you can sense excitement, and adventure to come. The combine technology between the spacecraft produces a large aspect of science fiction in the film. You can see our past and the present to show the advancement of the technology since 1969 and the time the film was suppose to represent. It also puts earth in prospect to the alien spacecraft. James Howie ...read more.