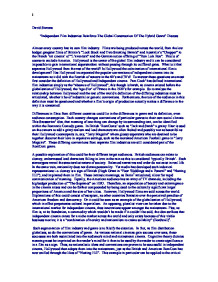 David Stevens "Independent Film Industries Reinforce The Global Construction Of The Hybrid Genre" Discuss Almost every country has its own film industry. Films are being produced across the world, from the low budget gangster films of Britain's "Lock Stock and Two Smoking Barrels" and Australia's "Chopper" to the French 'art cinema' of "L'aventura" and the German action offering of "Run Lola Run". This is of course to exclude America. Hollywood is the center of the global film industry and it can be considered impossible to gain international superstardom without passing through its coiffured gates. What is it that separates Hollywood from the rest of the world? Is Hollywood the culmination of international filmic development? Has Hollywood incorporated the popular conventions of independent cinema into its mainstream as it did with the flourish of auteurs in the 60's and 70's? To answer these questions one must first consider the definition of Hollywood and Independent cinema. Pam Cook1 has defined international film industries simply as the "absence of Hollywood", this though is harsh, as cinema existed before the globalisation of Hollywood, the 'age d'or' of France in the 1920's for example. So to analyse the relationship between Hollywood and the rest of the world a definition of the differing industries must be articulated, whether it be of industrial or generic conventions. Furthermore, the role of the audience in this definition must be questioned and whether a film's origin of production actually makes a difference in the way it is consumed. Differences in films from different countries could lie in the differences in genre and its definition, even audience consumption. Each country changes conventions of particular genres to their own social climate. This Saussurian2 idea, that meaning of one thing can change by its surrounding text, can be identified within the Romantic Comedy genre. In British 'RomComs' such as "Jack and Sarah" a grainy filter is used on the camera to add a gritty realism and lead characters are often faulted and possibly not as beautiful ...read more.

This again leads to the question of the genre's popularity and a possible answer is that the gangster film had proven to be the playground for groundbreaking directors. Within independent cinema, without the narrative constraints of industry pressure, young directors have had the chance to break boundaries. Guy Ritchie's success with "Lock Stock and Two Smoking Barrels" has lead to populist imitations such as "Gangster No1" whilst "Chopper's" director Andrew Dominik created massive uproar in Australia over his sinister character study. Even within Hollywood much innovation has appeared through this genre, as the 'brat pack' of director/auteurs changed the genre single-handedly. Francis Ford Coppola created the modern gangster film with "The Godfather" whilst Martin Scorsese explored it through "Goodfellas". This popularity through directorial innovation conjures up an idea of the gratifications model as the audience searches for, as Renoir16 put it, "esoteric structure" throughout the genre. Yet again, though, industry demands must be considered as Scorsese's later works such as "Casino" could be seen as studio demands from Universal for a repeat of his success, equally so could Coppolla's return to "The Godfather" in 1990 funded by Paramount. Therefore, the auteur can be seen as becoming diluted and formulaic, only supplying a global industry and therefore aiding the construction of the hybrid genre. Going back to simple ideas of narrative could also help explain this popularity, as Propp's17 characters can be seen, for example in "Donnie Brasco", Depp is the hero, Pachino the helper, Heche the prize and Madson the Villain. Similarly in the German "Run Lola Run", Lola is the heroine, Manni the prize and Ronnie the villain. Another prevailing narrative similarity is that of Todorov's18 equilibrium, for example "Casino" starts with Sam having a bookkeeper's job, the chaos ensues with his attempt at running a casino, then equilibrium returns once more as he again becomes a bookkeeper. This all points to the same conclusion, that despite independent innovation, globalisation has lead to the unification of the gangster genre, a pattern repeated across film and epitomised with the tentpole blockbuster, such as the kung foo/western/action hybrid "Shanghai Noon". ...read more.